Things That Blow Up 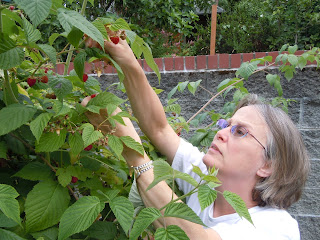 It’s July, and we’re making great headway manufacturing our crack supply for the next year. Our raspberry crop is booming away out there and we can barely stand to divert a single berry from what we’ve determined is its highest and best use: syrup. The recipe is even simpler now that I ignore portions. The portions, as told to us, are One Part Raspberries to One Part Sugar, which even works in metric. I have trouble getting that much sugar into the jar, though, so I’ve taken to just filling up my big jars with berries and pouring sugar in until there’s no more room. The jars get put in a cupboard for three months, six months, or whenever we get a notion, and then the berry sludge is strained out. The resulting smaller jars of syrup last us until the next season. It is poured on Death By Chocolate ice cream, which is available around the corner, and there’s nothing I can make for dessert that’s any better. “I could make a cheesecake, or a Boston Cream Pie,” I tell Dave, and he gives it a moment’s thought, and we both say “or we could get some Death By Chocolate ice cream and pour raspberry syrup over it,” and that’s usually that. Thus my entire culinary contribution for the whole year has now dwindled to about ten minutes of work in July. 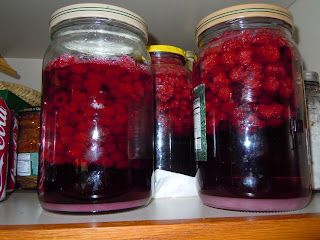 The other day I was checking on the most recent jar of syrup, and it was all sticky. I wiped it down and discovered that it didn’t appear to be leaking from the lid. Which made no sense. I got a thimble and put all my reasoning ability into it, and I still couldn’t explain it. Could syrup possibly leak from the bottom of an intact glass jar? Move over, Einstein–it was only two or three minutes before I was able to correctly deduce that the source of the leak was the third jar back, after finally noticing that there was raspberry syrup all over the cupboard. That last jar was bubbling and working and jiggling its lid something awful.

It reminds me of the time I shared an apartment with two other girls, one of whom was a baker. Late one night there was a terrific explosion, and I pulled my blankets over my head while my roommates scurried out to confront the cannon-wielding intruder, and eventually ventured out myself. (I’m a great first responder as long as I get to go last.) The horror! The entire kitchen and most of the living room were coated in goo, glass, pickle bits, vegetable shrapnel, and what-have-you from floor to ceiling. I was still working on the cannon hypothesis and totally baffled, but my baker roommate was bold enough to taste a fingerful of guts hanging from the ceiling and determine that the culprit was the jar of sourdough in the refrigerator, which had blown up and blown the fridge door open and rained terror on the rest of the apartment. It was as if the Pillsbury Doughboy had  strapped on an explosive vest and declared jihad on the leftovers. 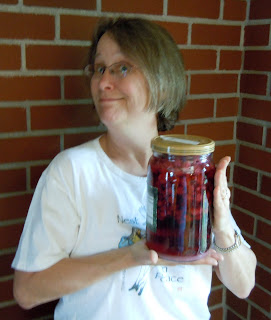 So I’m not usually the first one to figure things out. It takes sharper minds than mine to connect the dots in any situation. Take the current childhood obesity crisis in this country. Turns out that Richard Nixon once concluded the odds of getting re-elected were very low if people had to pay too much for groceries, and he directed that food be kept artificially cheap. That’s when the massive price supports for corn began, and to this day we have tons of crappy high-calorie food made out of corn syrup, and it’s really, really cheap. So our first lady can encourage us to eat fresh fruit and vegetables all she wants, but for most people they’re too damned expensive compared to our subsidized crap. Ultimately they aren’t as expensive once you factor out our tax contributions to the corn growers and the diabetes epidemic, but there’s no real danger we’ll be giving up that subsidy any time soon. Your average consumer will look only as far as the first jar–his grocery bill–and swallow the new narrative that the liberal elites are the ones who don’t care about poor people, and nobody will follow the trail of syrup back to the jar in the rear of the cupboard. Even though it’s our kids who are blowing up.