Things That Fall Out Of The Sky 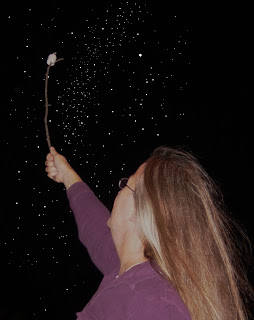 It was getting on the middle of August, time for the annual Perseids meteor shower. Dave and I are always holding out hope for a celestial doozy, something you could read the newspaper by, something just this side of a war zone. The way I see it, a person’s got to die some time, and there are a lot worse ways to go about it than to be hailed on by flaming space rocks. We bring our best attitudes, lying in the lawn chairs, pointing our marshmallows towards the sky. Hey, optimism is free. But although Portland, Oregon is a pretty terrific city, it’s still a city, and if one is to really appreciate a meteor shower, it’s best to go a little ways out of town.

So we went to Maine.

Sadly, this involved air travel. Air travel can produce horrors for even the most intrepid traveler, and I am notably trepid. Even my most routine trips have a way of going sideways. All I had to do in this case was get myself deposited in Boston and I would be scooped up and carried off by loving friends with cars, brains and everything. I would be ferried about without a care. Linder or Walter would take care of everything. Just get to Boston.

Not long ago, Dave and I had attempted to fly to Portland, Maine, where Linder and Walter were planning to retrieve us. At that time, they probably were unaware of our unique proclivity for disaster, and were merrily on their way to fetch us when we woke up on the floor of the LaGuardia airport, in the wrong gate, having missed our connecting flight to Maine by a good hour. Not many people with a five-hour layover miss their connecting flights. Not many people can fall asleep 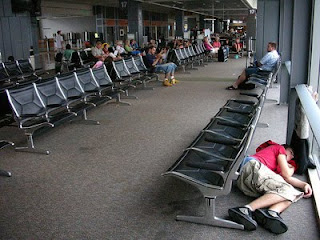 We had a crumpled piece of paper with Linder and Walter’s cell numbers on it and frantically threw quarters into a phone at the terminal, which hoovered them up like a slot machine. The poor phone had not seen action in years and was clearly starving to death. It balked and barked and finally held onto a tenuous connection long enough for us to reach our friends and save them another hour of driving. One much-later flight, a taxi ride, a stint on Greyhound and about twelve hours later, we were scooped up at Boston and all of us tried beerily to put the day behind us.

So on this occasion Walter reviewed the arrangements by e-mail and asked, in a hopeless postscript, if we had somehow managed to acquire our own cell phones in the intervening year. (Even in e-mail his query had a certain bleakness to it, as though he were a musician on the Titanic examining the bass fiddle for buoyancy.) Of course, we hadn’t.

We boarded the plane without incident, set up shop in 27B and 27C, and peered nervously at the passengers coming up the aisle. And there, lurching towards us straight out of a Gahan Wilson cartoon, wide, squid-eyed, and unhinged, was the proud tenant of seat 27A, who wedged himself in and began to expand. It was only two hours to Salt Lake City–not so very long a time to sit with my shoulders bunched up under my ears. On the next leg, however, I was delighted to discover that the window seat was occupied by a small woman, neat and narrow, who slotted herself into the seat with enough room left over for her entire aura, and who smelled like nothing at all. Ah! There she sat, just she and her romping little rhinovirus, which she presented in aerosol form for the next four hours.

Boston. Just make it to Boston. The sky was clear as we began our descent, right on time. There wasn’t a cloud in it, except one really turgid one right on the runway, looking like something the tarmac burped up all on its own. The plane abruptly plunged into darkness and when the runway finally appeared, about ten yards below, it was not the section of runway the pilot had in mind. The engines roared and the plane clambered back up to the sky and headed away. After a few minutes the pilot chimed on, cheery. “Well, folks,” he said predictably, “that little cloud back there wanted to give us a little trouble, so the tower has given us leave to circle around for a little while until it clears up. But don’t worry–we’ll get you folks back on the ground in another five minutes, one way or the other.”

“Another five minutes” does not actually mean the five minutes coming right up, but rather a whole different five-minutes about an hour into the future. Also? There’s only one way I’m interested in getting back on the ground. Not the other.