Things We Count On 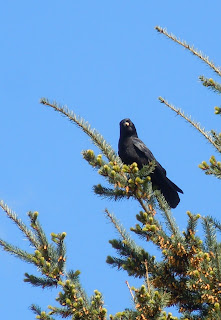 It’s spring, and the signs are everywhere. A single crow has taken up honking lessons and is sitting at the tippy top of a fir, where he practices from ten in the morning until dusk. Gaannngkh. Gaannngkh. Gaannngkh. It’s one beep every ten seconds, give or take, and will go on for about a month. Dave is occupying himself outdoors on some sort of project for us or for a neighbor, and in another hour he will suddenly drop his tools and go stand under the fir and yell hey. Hey. Hey. Hey. Hey. Hey. Or sooner, if the project is not going well. The entire local biosphere is responding predictably to the rhythm of the ages. Down on Alberta Street, Gimme A Quarter Guy will have set up between the Mexican restaurants for the afternoon. GQ is an immense man with a menacing expression who tends to unsettle newcomers. He stands on the sidewalk and whenever anyone passes by he growls gimme a quarter, going off like a proximity car alarm. You can usually count on him being right there but once when we were driving we saw him several blocks away outside a Walgreen’s. We saw his mouth drop open when a small elderly gentleman walked by and the old man spooked like a horse in a thunderstorm and emptied all his pockets before hurrying on down the sidewalk. Even from inside the car we knew what GQ had said, and he never says thank you. Someone has tried to sweeten him up of late and now when he says gimme a quarter and we reply, sorry, I don’t have a quarter, he says oh, sorry. He’ll get a buck next time.

Birds are coming back, the ones that wintered somewhere else. Many critters move around, the same way people summer in the Hamptons and winter in Florida. That’s the usual seasonal cadence, but here we have ants that are probably nearby all year, but spring in our kitchen. They just want to get out from under all the wet, and our kitchen is a favored resort. We see their little brochures on the countertops, and the tours of the sugar drawer are always booked up. Natives are known for finding tourists irritating, and we’re no exception, but the ants are not put off. They keep coming and coming, thick as Germans on the Riviera. 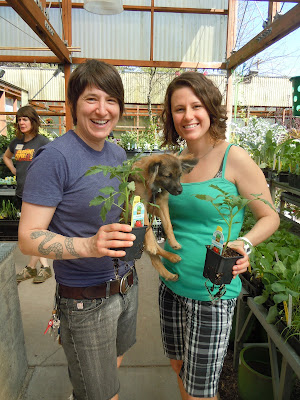 Tax day has come and gone and that means that the newer gardeners are going to be coming home with big tomato plants any time now. We’re officially past our last-freeze date, although some winters, like this one, it never really even got that low. So they’ll be unloading plants out of their hatchbacks and fluffing up the soil and tucking them in, and for the next month and a half we’ll see them going out and bending over them, fists on their hips, and walking back inside, increasingly morose. By Memorial Day, when we will be planting our own tomatoes, our neighbors’ tomatoes will be exactly the same size they are now, only a little more dejected-looking. Ours will take right off with a bit of warmer weather, and we will have our annual bump of smugness for a week or so, but every one of us will tend those vines until October, when we’ll be Googling green tomato recipes. It’s a sweet exercise in optimism and speaks well of us here. We’re like little horticultural Cubs fans.

We cherish these hallmarks of every season and anchor our lives to them. They help us to imagine that things will always be the same and our own time will never end. Very soon we will be getting into election season and someone will produce a sign with a red, white, and blue motif suggestive of a flag, and the sign will have someone’s name on it and the words “THE TIME IS NOW.” Which will be true, and may be the last thing we can agree on.