Thirty Inches. Or So They Say. 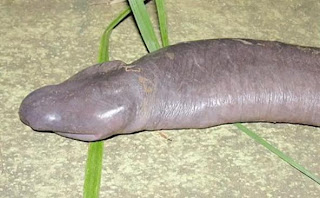 In the last week no fewer than five friends have sent me the same article about the penis snake that someone found in the Amazon. I’d like to think they sent it to me because I am a curious soul, although my mother might have had an entirely different take on it. From the photographs it appears that the penis snake in question is thirty inches long, in a relaxed state.

It is appropriate to send a photograph like that to me because I am a certified member of the Love Generation. We in the Love Generation liked to express ourselves with anything we had that could jiggle or flop out, and as a result have probably seen more than our share of genitals. In the early seventies I engaged with enough penises to come to a few conclusions, among them that in fact size does matter, at least at the extremes. I still wonder about the well-being of a fellow I was briefly acquainted with who had to hunt around in his pants for his, and who occupied crevices with all the subtlety of a dime in the sofa cushions.

We called ourselves the Love Generation in order to set ourselves apart from our parents who, having suffered through the Great Depression and fought a great war, settled down to the soulless work of maintaining a home and nurturing children and sending them to college and otherwise demonstrating no aptitude for love at all, at least as we celebrated it, lying around with our attractively taut skin in a pile of tits and daisies and penises and doing as little work as possible. We were all about love, right up until we could get T-bonds at 18%.

At any rate, my reaction to the 30-inch penis snakes that were filling my inbox should have been entirely predictable to those who know me. “That,” I said immediately, “is not a snake, but a caecilian.” My familiarity with caecilians is, in fact, my most distinguishing feature. I have known about caecilians since I did a report on amphibians in the fifth grade. Then as now, I was into salamanders, but was encouraged to do wider research, and that is how I came to know that there are four kinds of amphibians: your frog, your toad, your salamander, and somebody else’s caecilian. You don’t run into caecilians all that much, and when you do, you’re likely to mistake them for worms. They’re blind, they’re legless, they poke around in holes in the ground, and quite frankly they are not as attractive as the other members of the class. But they are more member-like.

The particular caecilian currently making the rounds on the internet is probably not new to science at all, but has risen to prominence because of its value in spacing out the cat videos. It has been named, of course. Something about finding a 30-inch penis makes people want to plant a flag.

In any case, this was not a recent discovery, but several months old. Whoever located the penis snake in the bottom of a drained lake evidently decided to sit on it for a while.