“Parents do their children no favors,” my father once said, speaking in complete sentences as was his affectation, “when they protect them from the consequences of their own actions.” As far as I know, mine didn’t protect me from the consequences of mine, in spite of which I made it into my twenties. If there were consequences to be suffered, I was expected to suffer them. For instance, when I came home at age sixteen drunker than ten lords, pinballing off the walls of the staircase and into my room, with a brief stop at the bookcase I knocked over on the landing, where I scooped the books back into the furniture while trying to get them to quiet down, I was awakened promptly a few hours later and packed off to the bus stop for my summer job. I was a slow study on the alcohol lessons, but in thirty-one years at the post office I never once called in hung over, and not because I never was.

That’s why it seemed sort of elegant and clean when a gentleman recently jumped off a monorail and into a tiger’s cage at the Bronx Zoo. You’ve got your action, and you’ve got your consequence. His leap was deliberate. He admired wild animals, and he had expressed a desire to be “one with the tiger.” He very nearly got his wish to be one with the tiger, for at least as long as it takes a tiger to process him and crank him out the rear end, say, a couple days. But zoo personnel intervened long enough to extract the fellow. 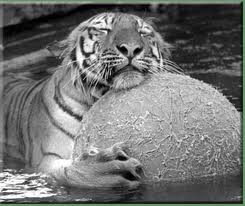 The tiger had to have been cheered up. It really doesn’t matter how many bouncy-balls you throw into a tiger cage, he’s not going to burn as bright as he would in the wild. Still, it was something. The tiger toy that projected itself over the fence and into his pen was damaged. He broke his shoulder and a hip when he landed in the enclosure, which was one consequence, and probably saved his life, because he didn’t act like proper prey. The tiger just dragged him around by the foot for a while to get some spark back in him before he could feel comfortable pouncing.

One of the problems I think we’re having as a species is that we’ve gotten powerful enough to push our consequences so far away from our actions that we can’t make them out anymore. Not that long ago a simple task might take ten of us all day, fueled by porridge. Now we jam a plug into the wall and pull out the mighty Columbia River in an instant. Or, elsewhere, a thousand years’-worth of photosynthesis, all mashed down neat. We use all that power to grind coffee beans that grew on the other side of the globe and we think nothing of it.

We think our food comes from the grocery store. We think our water comes from the faucet, and we think it always will. People used to wrap up in blankets when they were cold. Now we pop over the ocean to go lie in the sun for a couple weeks.

That’s how entitled we think we are. During the Democratic Convention, a group of undecided voters was polled for reaction after the President’s speech. One fellow was peeved. “I didn’t hear anything about what he’d do about gas prices,” he whined. “And is he going to make us buy those squiggly light bulbs?” This was a man bobbing around in a bewildering sea in which nothing was connected to anything else, and he was adrift at the mercy of flotsam and jetsam he couldn’t begin to identify. 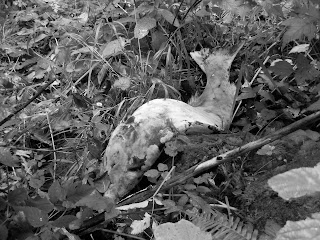 I think most of us might make some wiser decisions. Not everybody, of course. There’s a tiger-jumper in every crowd. But I’d never vote for one.