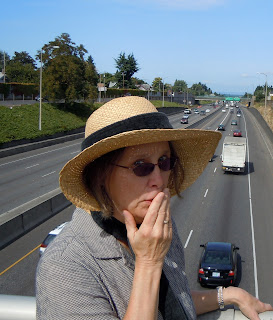 This will no doubt resolve itself in time, but for now the thought of plunging in and learning the ropes makes me spin into reverie. This is a cherished ability of mine, to look clear-eyed into reality and veer away, and it’s a significant component of my mental health regimen. In my reverie there’s an on-ramp, and a man is walking up it towards me. That’s me at the top of the ramp in a long homespun dress and a bonnet, a goose quill behind my ear. Sure, it seems a little girly now, but that’s what everyone is wearing, and you don’t have to put on any underwear. The man gets closer and closer. He has a broad, infectious smile. Why, it’s Dwight Eisenhower, sure as shit! He gets up to where I’m standing at the top of the ramp and sweeps his hand downhill, indicating a mighty tempest of traffic going every which way. He’s so friendly and pleased I can’t help but smile back. But I’m uneasy. I’m sensing disapproval from my father. My father did not like Dwight Eisenhower.

“Why not?” asks Mr. Eisenhower, which startles me. Then I realize Mr. Eisenhower and my father are both dead, and had probably already had words. Daddy didn’t mince them. He flang them out fully-syllabled in impeccable order, such that, even listening, you could tell they were spelled correctly, and anyone arguing with him was likely to realize he was losing even if he didn’t know why. Mr. Eisenhower was still smiling. He was hard to dislike, actually. 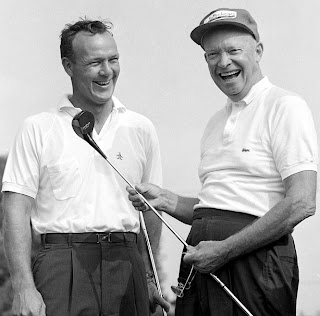 I had to think about it. Most people liked Ike, and the main reason Dad didn’t was that he wasn’t Adlai Stevenson, near as I could make out. I was too little to understand exactly why we weren’t Republicans, but we sure weren’t. Being a Republican meant you had to join a private golf club and drive an Oldsmobile to it, and Daddy was a Peugeot-to-the-hiking-trail kind of fellow.

“Well,” I said, thinking back, “I’m not exactly sure. I was pretty young. There was that whole Richard Nixon thing, and his obsession with the Communists.”

“Was your father a Communist?”

[Pretty much. Let’s just say he might have had Bolshevik sensibilities.] “I’m not sure it’s any of your business,” I said, getting my back up a little. Dad might have been on to something. “My father didn’t think much of Republicans, and that was well before they all turned into lunatics.”

I was, but I can wear whatever I want in my own reverie. I would have backed all the way into the nineteenth century, if I weren’t conflicted about the whale oil.

“Don’t mind me. You can wear whatever you want in your own reverie. Now,” Mr. Eisenhower went on, putting a hand on my shoulder and fanning the other towards the swirl of traffic below. “Have a look. It’s my Interstate Highway System,” he said. “Do you like it?”

It looked pretty scary, tell the truth. I edged a bit further into the past. “I don’t rightly know, Mr. Eisenhower,” I said. “I reckon I can purt’ near walk just about anywhere I’ve a mind to. And if there is somewhere I need to get to in a hurry, why, I can just ride my old donkey. I have a whacking stick to get ‘er going with, too.” I did, but I couldn’t bring myself to use it. Don’t tell Mr. Eisenhower, but I’d just carry it under my arm and bounce up and down on my ass, going unhh, unhh, unhh. If the donkey felt like going somewhere, off we’d go. It was good enough.

“You’d never use a donkey-whacking stick,” he said, reading my mind again. “You’re not the type. Try my Interstate Highway System instead. You’ll love it. In no time at all you won’t know what you did without it.”

I transferred the goose quill to my other ear. “I don’t know,” I said. “I guess I don’t see the point. Everything I need is right nearby.” More important, I am uneasy about taking on something I’m currently quite capable of living without, and then not being able to live without it. Seems burdensome. Pick up too many things you can’t live without, it seems like you’re setting yourself up for a flame-out. Autopsy results indicate she died from a lack of an ATM, wasabi peas, and early internet withdrawal, compounded by the end of Boston Legal reruns. I gave Mr. Eisenhower an apologetic look. “It’s so busy and loud. I don’t know how to drive.” 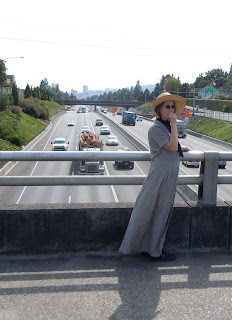 “Nothing to it.” Mr. Eisenhower opened the door to a big, shiny car. It might have been an Olds. I sensed a cosmic raised eyebrow from my father, but I couldn’t help but look inside. At least it was a standard transmission; that wasn’t Republican. I got in and sat down, smoothing my dress over the bench seat. There were no seat belts, and plenty of room for the donkey. “I don’t know,” I repeated.

“You’ll love it. Off you go,” Mr. Eisenhower said, grinning wide, leaning into the window and smacking the shifter into neutral. The Oldsmobile edged down the on-ramp and picked up speed. “The manual is in the glove box,” he hollered. I pawed at the glove box in a rising panic but found nothing but neatly folded state highway maps and a bar of dinosaur-shaped soap from Sinclair Gas. Below me the traffic was a blur. I braced for a terrible collision but when I opened my eyes again I was coasting to a stop on the highway with the traffic parting smoothly all around me. I sat in the car and looked around, then perused a map before snapping back to the present.