To Form A More Fabulous Union 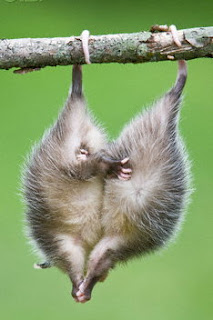 sion to revisit my earlier quandary about the raccoons and the possums. We used to have possums, now we have raccoons. I have a new theory as to why. Possibly the raccoons evicted the possums from the yard until they agree to quit hanging by the tail. Raccoons couldn’t hang from their tails if they tried, but the very idea of it makes them all squirmy. From the raccoons’ point of view, it simply can’t be borne.

I’m basing this hypothesis on the news today that Vermont is all in an uproar again over gay marriage. They’ve had legal civil unions there for nine years, and evidently a whole lot of Vermonters haven’t gotten used to it. Maybe they don’t get out much. This week the state is considering a bill that would allow same-sex marriage. Protesters are converging on the Capitol with signs reading “Marriage–A Mother And Father For Every Child.” When Dave and I got married, we were unaware that procreation was required. It isn’t something we’d had in mind. At first, people asked us when we were going to have children. That line of inquiry started to peter out when we told them we’d been to a genetic counselor and found out that there was just too much risk the child would end up something like us. And no one asked us anymore after Dave started explaining that you couldn’t make babies with spit. Aaany-hoo.

I guess we’ll have to forgo travel to Vermont in case they snatch back our marriage license for lack of spawn. I’ve never really understood all this uproar. It’s truly baffling. Somehow I get the idea that folks think same-sex marriages are so attractive that their children will be vacuumed right up into one, emerging with good taste and a lively sense of humor, and then where will we be? But it isn’t catching. (It’s a gift.) In the article, it is explained that opponents of same-sex marriage believe it will “render men and women interchangeable.” Well, that clears it up. It’s a real concern. Right there in Vermont, a young fellow was recently fined for shooting a doe illegally. He went to a considerable amount of trouble to drill and fasten a rack of antlers to it with lag bolts and epoxy, and tried to pass it off as a buck. So you can see p 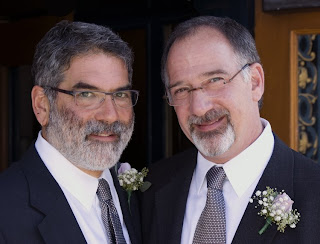 eople aren’t making this stuff up; they see it every day.

Still, it all makes me a little cranky. I’m assuming that all the people who feel this way will eventually wander to the ends of the earth and fall off, and the rest of us will have our nicely spinning planet to ourselves. As to the possums, as far as I’m concerned, they can come back any time. I don’t care how they’re hanging.