To See, Or Not To See 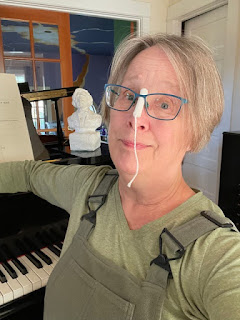 My eyeballs are starting to get obstreperous, and it’s really no wonder. The mystery is why it’s taken so long, because I have treated them like crap since forever.

We all start out with little baby eyeballs made of rubber and goo and they increase in size dramatically after we’re born. For most people, they top out in size in the teenage years. Mine peaked at age seven, leaving me with Bedroom Closet eyes. Age seven was also when my eyeballs realized I was never going to be tall and they started to squash down flat to fit in the available space, which really did a number on my ability to see anything more than a foot away.
So I got combat lenses when I was fourteen. Contact, I mean. That was about eighty years after the first contact lens was invented and no doubt an improvement on the original, which was made of glass and covered the entire eye. I’m not sure who volunteered for that or if they included any lubricating solution, but opium was widely available. Modern contacts are made of fun and frog hair and you wear them once and fling them into the air like Mary Tyler Moore’s hat. My first pair were hubcaps and you inserted them with a drop of Tabasco. In a pinch you could pop them out and open a bottle cap with them, but in ordinary use they served to collect grains of sand to rake over your corneas. If I am not mistaken, they came with a little Dremel tool set to grind down your eyeball abrasions for a perfect fit. Even so, if you blinked too hard they’d travel sideways and embed themselves into the eyeball area Formerly Known As White, sometimes with enough suction that they needed to be pried out with a fingernail, leaving perfect bloodshot circle tattoos behind.
But I must report I could see really well with contacts unless there was dust in the air, when I would be paralyzed with my eyes shut waiting for a friend to come along and tow me away by the elbow.
One time, because for some reason I had not yet gone blind, I used my roommate’s wetting solution, just to try it–the way you try other people’s shampoo–even though she’d bought it in Mexico and the bottle was labeled in Spanish, and even though (as it turned out) it was not wetting solution at all, but cleaning solution, and boy howdy it got loud in that bathroom that morning.
Throughout all of this I became so comfortable with touching my own eyeballs that I did it routinely, licking a finger to scoop out eyebrow hairs and eyelashes. Thank goodness those have all fallen out by now.
Anyway. It’s no wonder my sad little soldiers of sight are starting to squawk. After twenty years of success with trifocals, effortlessly navigating the three zones of correction, now none of the zones work all that well, and even new prescriptions are more of a compromise than a solution. And of course there is the matter of the piano glasses specifically prescribed for reading sheet music, which are not quite up to the task. I have discovered that if I pull my glasses out about a centimeter from my face, everything looks pretty good, although bringing the music that much closer does nothing at all. I do not understand this.
But I can achieve just the right distance by wedging a tampon at the bridge of my nose. It’s fine. It’s not like I’m at the concert hall all dolled up in a long black gown.
The string is a little distracting.
By Murr Brewster|2021-11-29T16:39:51-08:00November 10, 2021|Uncategorized|20 Comments