A Too Smart Car 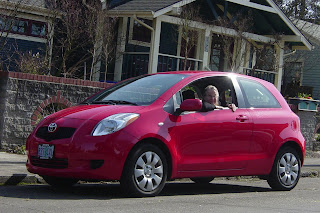 My car got a recall notice the other day. There’s something screwy with the seat belts. There’s some little doo-dad in there that might cause the car to burst into flames in a front-end collision, is all. The possibility of getting into a wreck is vivid enough without tossing a fiery explosion into the scenario, so I took it in for the free fix.

This is my favorite of the four cars I’ve owned, even though the second one was a snazzy silver sports car. I drove that one around doing 50 on the highway. It went from zero to 60 in, well, at least twelve years, and we’ll never really know. In retrospect, it probably wasn’t a good match for my personality. This one, though, is off-the-charts adorable. It looks like a little red jellybean. There’s not much to it; no power anything; even the windows are roll-downs, but I can reach them all from the driver’s seat without lifting off the left cheek. Considered one way, it gets fabulous gas mileage–about two weeks to the gallon. But on the occasions I do drive, I find myself a bit disappointed in the mileage. It shouldn’t take any more fuel than you’d need to power a honeybee. But the last time out, it didn’t even crest 30 mpg. I suspect the car’s brain is involved.

My last car, a thoroughly ordinary sedan, was the first car I owned that had a brain. And it was Abbie Normal. It was prone to automotive grand mal seizures at unpredictable moments. In between convulsions it was quite reliable. But intermittent reliability is, concept-wise, like occasional irregularity. It took two brain transplants to shape it up, and then an old guy in a station-wagon plowed into it, and later I drove it into a massive crater, and later yet the mechanic confiscated it so I wouldn’t be driving it when the rear axle fell off. He wouldn’t give it back. He’s ethical. Then I got my sweet little jellybean.

The salesman told me 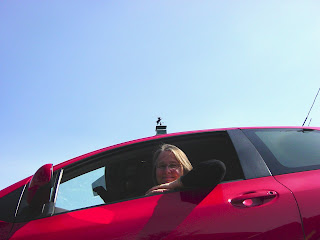 to drive smoothly and consistently for the first thousand miles, after which point the car’s brain would figure out some things about me and adjust itself accordingly, by magic. I should have realized then and there I’d be in trouble because when my possessions are allowed to have brains, then they are capable of standing in judgment of me, and I never come out good. I fear that’s what happened this time too. I had gone about 1500 miles before someone noticed that I’d been driving in third gear the whole time. There are a lot of options on the gear shift, but one of them is “3-D.” That’s where I always put it. I guess I thought everything would look flat until I shifted there. In reality there are two options in that slot: third on the left and drive on the right, and I had been snugging it into third. So after a thousand miles my car learned something about me all right, and it wasn’t flattering. Sure gets good mileage parked, though.