Twenty-Five Pounds Of Oats To The Good 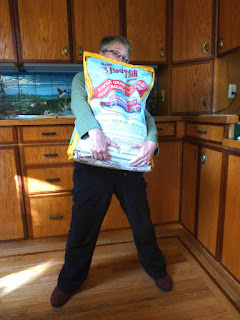 The other day I realized that the 25-pound bag of oats that I bought for $19 has lasted me almost a year, and I eat oatmeal every day. I add blueberries I grew myself, which also last all year. When I heft my next new bag of oats, it will feel heavy with virtue.  It will feel as though Grandma, now around 200 years old, is smiling right behind me, her floury hands on her hips and her root cellar fully potatoed for the winter. I will feel like a woman acquainted with the thuck of Mason jar lids sealing shut. A woman with a good pickling brine. A woman who can take care of herself.

And that’s not good. We have this gigantic earthquake penciled in for these parts, and we have been advised to be prepared with anywhere from three weeks’ to a year’s worth of water and food, depending on whom you ask. We’re told no one is going to come feed us or tape up our scratches or anything else for a good long time, because even the rescue personnel are planning to be buried in rubble. Electricity and gas will be a fond memory. We’ll be back in the 18th century without the manual.

So that’s a problem. Every critter on the planet knows how to go about feeding and watering itself, and humans have been no exception, until about a hundred years ago. Then we went stupid. And now, even though we tend to think of ourselves as pretty clever, with all the wisdom of the world on a little pocket doohickey, most of us are basically screwed if we can’t drive to the grocery store.

Come the quake, your average dude will be able to glean Cheez Doodles from the sofa cushions for about a day. He might be able to Second-Amendment someone out of their food stash, but then he’s out of options. We’re the first species to have evolved past our own survival skills.

My own life strategy has been to make myself appealing to people who know how to cook, but if push came to shove I could probably cope until the cupboard ran dry. I’m just a little ahead of that large contingent that doesn’t know how asparagus grows, or thinks turnips hang from turnip vines. But if you throw me in the woods to fend for myself, I’m in a world of hurt. I can recognize a few berries, but unless I can manage to whack a chipmunk and toast it over someone’s broken gas line, I’m going to be very hungry very fast.

My friend Mary Ann will not. Give her two sticks and a patch of forest floor, and she’ll weave herself a basket and fill it with edibles and conjure fish out of the stream and serve you fourteen members of the insect family in all stages of personal development and make you think it’s risotto. Give her another week and she’ll have relieved enough mammals of their fat stores and pounded nuts and berries into them that she and three of her closest friends will be sitting pretty through a snowy winter, with plenty of time to play Scrabble. She’ll make bon-bons out of bark. She’ll negotiate with bears.

My new strategy is to hope that when the earthquake comes it will push my little piece of the crust close to Mary Ann. I further plan to be appealing.