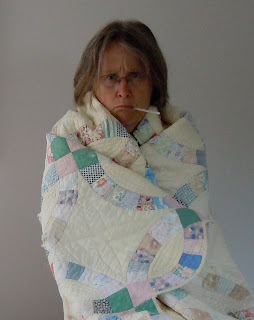 A few weeks ago I took a trip to Uh-Oh World. Uh-Oh World is where everything is upside down and nothing is as it should be. In Uh-Oh world, W.C. Fields strolls through Disneyland with a sarsaparilla. Michele Bachmann takes up paleontology. The Pope gets caught in public without his homilies. And I don’t take a dump for three days.

Not three consecutive days, but still. It’s so wrong. This is not the sort of thing that is supposed to happen to me. No matter what I put in the top end, it is supposed to motor on through on schedule. I could eat a sofa and pass it in neat little pillows. Sewer rats set their tiny watches by me.

The first day I didn’t drop a deuce was annoying but not, to tell the truth, entirely unprecedented. Sure enough things seemed to be back to rights the next morning, including what we will call the backlog. But something was amiss. There was a sensation of holding back. Specifically, there was an area of tenderness on the west coast of my GI tract in which I suspected some unauthorized malingering material. There was also a fever.

I got Dr. Google right on the line. Dr. Google suggested that I might have developed a diverticulum. A diverticulum is a little pouch in your intestine where you can store shit in case you need it later. This is the sort of idea that seems thrifty and sensible at first, but you follow that line you will end up with nothing but tiny aisles running through your whole house, as it were, and your relatives will be talking about an intervention. It’s not good.

The whole beauty of shit is wasted if it doesn’t come out where it can be appreciated properly. Without that, it is a noble thought unexpressed, a greeting card lost in the mail. 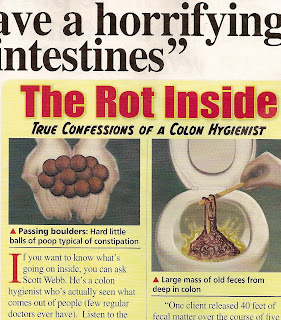 When I delivered mail, speaking of mail, I was particularly taken with the advertising flyers put out by some outfit hawking probiotics that warned against the dangers of a sluggish digestive tract. It was illustrated. “What does it mean if you have small, round poops?” it queried, showing a drawing of small, round poops. (My friend Carl knew that one. “It means you’re a deer,” he said.) Other drawings depicted a cross-section of the intestine after proper use of their recommended pill. It was not only pink and shiny but actually spangled with little star-gleams. In contrast, there was another illustration of a man holding what appeared to be the blackened, gnarly skin of a massive python on a stick. This, we were informed, was the actual content removed from a deceased gentleman’s intestinal tract. Possibly with the stick. It was alarming. We were further informed that John Wayne was discovered, upon his death, to have been harboring thirty-five pounds of fecal matter, neatly explaining both his peculiar gait and the downside of fame. 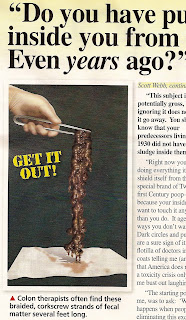 Well, when I die, I am hoping for a better legacy than that. I immediately phoned the advice nurse at Kaiser and advised her of my turgid condition, demanding treatment. She was not unsympathetic, but suggested I might wait a few days to see if things resolved. The fever did go away, but it was another two days before the train came rumbling through, car after car after car. The morning commute is back on track, but I am not interested in being a person with diverticulitis, which Dr. Google told me all about. It’s not my thing. Except for the possibility of flatulence in the urine. That part sounds sort of interesting.