Up Against The Wall: Part One 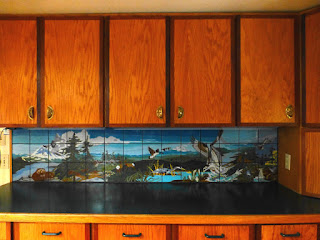 Last century, I glazed a bunch of tiles for a backsplash in our new kitchen. My friend Katie set me up with all the proper glazes and instructions. All I needed to do was draw out the design, fill in the glazes as though coloring in a coloring book, and then put two more coats of all the colors on. Then anyone with a kiln could fire them for me.

There are easier ways of going about this. Most of the time, when you see a scene depicted in tile, the artist has painted the scene–once–and then put a clear glaze over the top. It will look like a watercolor. But I wanted the thick, jewelly, luscious version. The deep, yummy, stained-glass version. And that takes three coats. Katie strongly recommended I make test tiles of all the colors so that I would really know what they looked like. So I took the time to paint each glaze–three times–onto test tiles and label them. 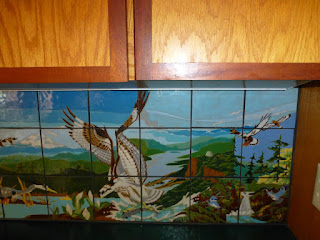 Already, this is way out of character for me. I was always full of ideas but had no interest in spending any more time on them than I had to. I used to sew clothes without pinning or ironing anything. They ended up with accidental ruching and off-set, asymmetrical seams that you might now see from a Project Runway contestant, although not from a winning one.

The tile project proved to be a complete pain in the ass. It’s one thing to draw in a design and fill it in with a coat of glaze. The precision required to repeat that design exactly with the second and third coats could fry your eyeballs. Glaze is not paint-like. I used a tiny brush. It was like pushing mud around with a bunch of eyelashes.

Also, my design was not that great. I started with Mt. St. Helens erupting on the left, because that’s what Mt. St. Helens was busy doing at the time, but I had seven linear feet to fill. That covers a lot of ground, especially when you’re using a bunch of eyelashes. So I punted. People like it well enough, but I always see this large, lumpen green hill sprawled across the middle, a hill that represents–well, if there was an artist’s statement associated with it, it would be “In this work I hope to demonstrate my sincere desire to get this piece of shit project over with.” 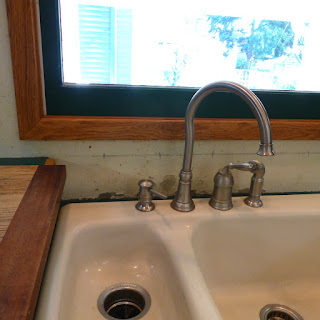 The original idea was to continue the backsplash all the way around the kitchen. The trim for the window was installed with small nails that never got hammered in all the way, because tiles were going to be slid under them. I could have soldiered on with the rest of it, but as I recall I had a lot of drinking to accomplish at the time. The nails are still sticking out. Sometimes I hang baggies on them to dry. The wallboard behind the sink is degraded from moisture. I’m used to it; it barely registers.

Then a couple years ago Dave came up to me, and in a mild voice with all the wheedle removed, he said: Now that you’ve been retired for–gosh!–five years, and we’re coming up on the–gosh!–thirtieth anniversary of the original backsplash, do you think you could maybe have a go at finishing that tile work?


He was so nice about it. He’s been waiting a long time. I said I would.

Although I really don’t like to reward a nag.