Up Against The Wall: Part Two 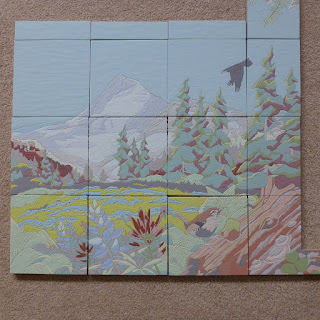 All right, I’ve gotten to work on the new tile backsplash.  In fact, I’ve been working on it for a year and a half. The design is way more involved than the last one was, thirty years ago. That’s not surprising. I drink less now–that being the only direction my beer consumption could have gone–and I’m not as inclined to half-ass my projects. In fact, I’m tinkering with it even to the extent of painting individual fir needles. I’m tidying up the intersections of colors with an Exact-O knife. In fact, I have, with maturity, become a complete fussypants.

And there’s no guarantee that’s going to do me any good.

Because here’s the thing. After I sent the first backsplash to the kiln, all ten-plus square feet of it, and it came out as well as could be expected, I started painting tiles as Christmas presents. Little things, like trivets. And about half the time they came out just fine, and half the time they Most Certainly Did Not. They came out of the kiln all runny and blurry, like over-nuked leftovers. I’d paint a flicker and it would come out brilliant with all the feather edgings intact, a constellation of spots perfectly arrayed on the belly. Then I’d take the same amount of time and trouble on another tile, and it would come out of the kiln looking like frat barf on Taco Night. 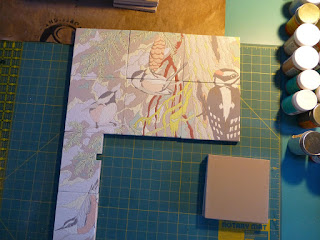 There was no predicting it. In a disturbing parallel to the current state of my cognitive abilities,  the result could be precise and orderly, or it could be all over the place. I asked the kiln owners if they had any insight into this. Not one did. “That’s the beauty of ceramics,” they’d tell me through rumpled grins, shrugging in their muddy smocks. “You’re playing with fire. You never really know what you’re going to get!” Ha ha!

And this is the real reason I never finished the backsplash project, thirty years ago. I was terrified at the prospect of spending literally thousands of hours hunched over in my studio, inches from my work, with my glasses off, with Exact-O knife and tiny brush, like some medieval monk, and have the whole thing go straight to hell in a few hours in a kiln. And no one can promise me it won’t. 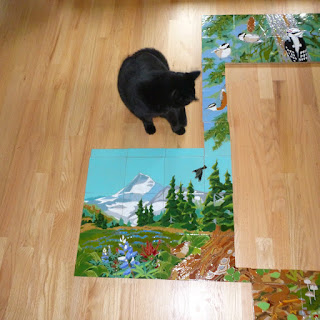 Picture Michelangelo in the Sistine Chapel. He’s been on his scaffold for four years with his head cranked back so far it might snap off at any time, and once he got around to creating God, there He was hanging right over him unnervingly for the whole rest of the project, and poor Mich had to paint chubby little babies over and over again just to get over the willies, and finally he eases off of the scaffolding and stands under his work and he’s disoriented and miserable but there’s this big ceremony and somebody hands him a bottle and tells him to go ahead and whack a pillar with it, and he doesn’t know if it’s a bottle of Champagne or a Molotov cocktail because he still doesn’t have his neck working properly yet, but everyone’s smiling and clapping and he just has to give it a whirl.

So I’m ready to pack my eighty tiles off to the kiln, and I don’t know what’s going to happen. It could be grand, or it could blow up. Either way, there’s going to be a bottle involved. 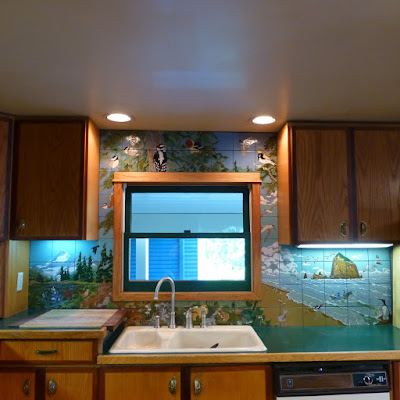