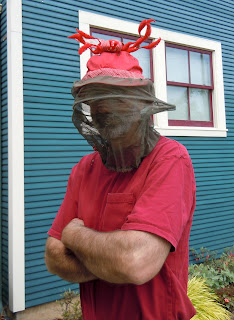 The first mosquito was annoying. It wasn’t until I slapped the second, a minute or two later, that I was flooded with panic. It hit me like that white flash of shock you get when you’ve only popped into the store for some cigarettes and maybe one game of video poker and suddenly a few hours later you remember you’ve left the kids in the car with the windows rolled up and a case of Ho-Hos and a little bottle of something to help you get some sleep. Pure dread.

I ran around the place looking for my strong, lean, brave man but when I found him it was too late. He was already slumped over, whimpering, drained, anemic, and a little pudgy. The pudge was due to a uniform layer of fused welts swelling his body a half inch in every direction. “I’m gonna die,” he said.
He doesn’t scare easily. This is the guy who maintained for years that “anybody can quit smoking. It takes a man to face lung cancer.” 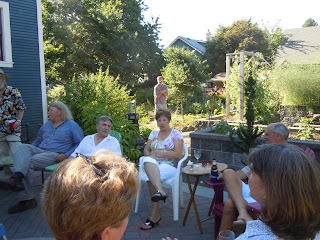 Mosquitoes adore Dave. They plan their holidays around him. When they’re done with him they all go off and lie down, patting their bellies and burping and maybe watching a little football. For years we have employed him at barbecues to stand a little off to the side and draw mosquitoes. They’d be ecstatic. We’d hear them yelling “wheeeeeeee-oooooo” with the Doppler effect kicking in as they zoomed overhead. If we brought him enough hot dogs he’d stand over there all afternoon and smack himself like a masochist with Tourette’s. 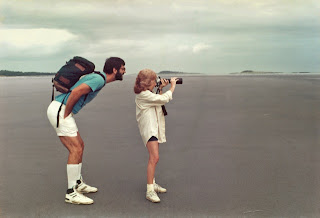 One time, in Maine, my sister and Dave and I walked through a mosquito-drenched forest to get to the beach (this is him on said beach with his socks stylishly pulled up as far as they will go to cut down on exposed skin). We expected the beach to be windy enough to repel mosquitoes and it was, except not these mosquitoes. Dave bailed out in fear when he got to the water and discovered they were still there. He ran a mile back to the car, shut himself and a few hundred mosquitoes inside and maniacally slapped the living crap out of every surface in it. Anyone happening upon the scene would have been concerned enough to call the authorities, after first pulling back a few miles. 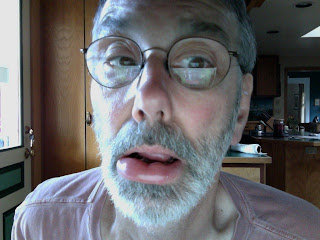 We’re not supposed to have mosquitoes in Portland. Screen porches are unknown. We only keep screens on a couple of windows to keep the cat in. Even Dave gets no more than a bite a night at worst, from the single mosquito in a mile radius. But suddenly this year we have mosquitoes, and their arrival coincided with the temperatures rising to near a thousand degrees, and at night we left a couple windows open a crack, leaving all the lights off. Dave woke up with a mosquito biting his lip, which swelled enormously. He looked like Angelina Jolie with a beard, which is surprisingly attractive. “What more can I do?” he wailed, and other than trying it again the next night with his pants off, I couldn’t think of a thing. 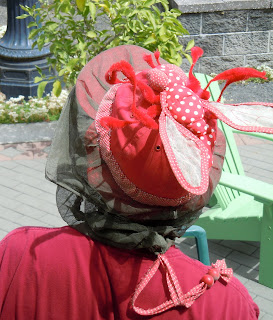 The reason we have mosquitoes this year is the record-breaking rains we had in May and June, brought to us by the same folks that brought unseasonal snow, monster hurricanes and successive hundred-year floods. Mainly people like James “Global Warming Is A Hoax” Inhofe, who also doesn’t think much of universal health care. If Dave ever gets out of the ICU, that’s who I’m sending the bill to.
By Murr Brewster|2021-11-09T21:27:30-08:00July 14, 2010|Uncategorized|34 Comments