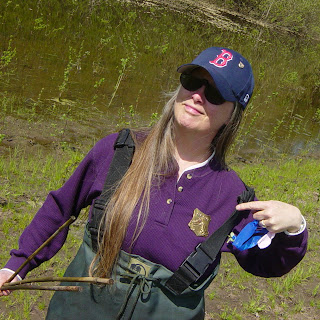 March 21, 2009. The forecast was rain, hail and thunderstorms. Obviously it was time yet again for my niece Elizabeth and me to go out and fulfill our sacred trust as Official Amphibian Egg Mass Monitors for the regional government. Earlier forays had had middling results, but now we were shiny with authority, proudly sporting our solid bronze Official Amphibian Egg Mass Monitor badges, thanks to Mary Ann.

We set out under a suspiciously sunny sky. Team Brewster was newly energized after a pep talk from the big Frog Egg Boss, Jean Lea. Four egg masses, found previously, were not to be pooh-poohed, she told us, and when we had time to think about it, in the two weeks since our last outing, they had been particularly lovely frog eggs. Plumper and more life-affirming than your average egg masses, and if you leaned in real close, you could almost hear little tails trying to sprout out in their little jelly sacs. This time that bog was going to be crazy with eggs. It had been drizzling more or less constantly for days and days, and a bit warmer, and sure enough, when we arrived at our assigned patch, it was wider and wetter and rollicky with frog song. I planted a boot in the mud on the edge, planted my hands on my hips to admire the scene, and slowly fell on my ass without further ceremony. We were ready to roll.

We set up a wading pattern and trudged carefully into the chilly swamp, eyes sweeping back and forth like pendulums, and encountered the usual issues with floating vegetation we couldn’t see through and muck and weeds that grabbed our feet and threatened our verticality. But it wasn’t until we’d been in an hour a 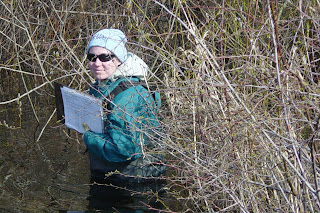 nd were up to our waists that half of Team Brewster went under. It wasn’t the half I was in, so I found it rather comical and may not have reacted properly. Why are you sitting down? I thought. Why are you making those squeaking noises? I thought. the masks of comedy and tragedy are closely entwined. The younger half of Team Brewster surrendered the clipboard and spoon and wailed tragically towards the shoreline to mop up, strip to underwear and decant the bog from her waders, which, to my surprise, she was able to do even without the instructions being printed on the bottom of the boot. After a short interlude she discovered, to the surprise of both of us, that she wasn’t going to die after all, and gamely came back in the water. Shortly after, we were rewarded with an egg mass. We were so excited and overcome that we completely forgot the four items we needed to check off on our clipboard, even though the directions were written down thereon, and flapped and hoo-hooed and generally proved completely useless for five minutes or so. Team Brewster had a fatal flaw. It’s the same flaw that is rumored to 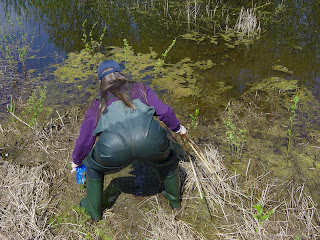 crop up in tiny isolated hamlets in the Ozarks. Briefly, it had too many Brewsters in it, and not enough moderating personalities.

Many people have found Brewster girls entertaining over the years. They watch in amusement as we tip over for no apparent reason, and make pronouncements that suggest our beads have come unstrung. But we were not designed to operate on our own. We require an anchoring influence. We need people who love us and care for us and set us back upright. We make great pets.