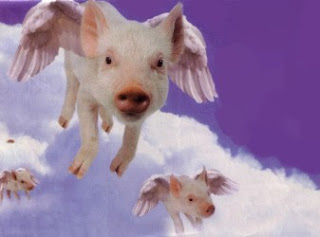 In June 2011, an enormous hog farm blew sky-high, killing 1500 hogs outright and damaging the reputation of the industry. Interviewed at the site of the blast, the manager kicked through an ankle-deep deposit of cracklins and stared up at the sky with regret. “If the fins in the ventilation system had only held, our entire product might have rained down as chops,” he said, but such was not the case; the barn was destroyed. A fine particulate cloud of Baco-Bits is believed to have traveled around the world twice, affecting sunsets for days. The precise cause of the explosion remains a mystery. Hog industry spokesmen are at a loss to explain what they describe as a “sudden highly localized reversal-of-gravity incident.” A local band of parishioners calling themselves Holy Pisspots Of The Lord has determined that the explosion was evidence of God’s wrath over something or other, and has set up a preliminary picket nearby with blank signs until they narrow down the list of society’s transgressions. But local scientists are fingering the poop. Contacted several miles upwind, Dr. Sneedwit from the county extension service explained that a full test of the hog poop lagoon will have to wait until he gets a fresh undergraduate, or until the return of the lagoon maintenance crew, Darryl, who is still in the hospital awaiting an eyebrow transplant. Nonetheless, he was confident that the culprit was the notorious Gray Foam in the poop lagoon, the result of a massive buildup of bacteria farts, set off by a spark. “It’s not the fault of the bacterium,” he said. “If you or I fell into a giant vat of cheese fondue, we’d eat our way out, too.”

The danger of a concentrated poop pile is real. My grandma’s farm in North Dakota had a repository confined by an old building foundation and Uncle Cliff regularly stocked it with fresh cow pies. This was the site of the first flowering of several of my personal hallmarks, including an attraction to poop and a tendency to tip over. I do recall trying to balance on the old foundation, and the next thing the adults know, there was a “ploop” sound followed by the sight of a small, dark, tragically encrusted figure staggering over the landscape, wailing like a tornado siren. I needed comfort, soap, and the loving arms of my mother, but instead I was hosed down in the front yard to the accompaniment of more laughter than is customary for Lutherans. 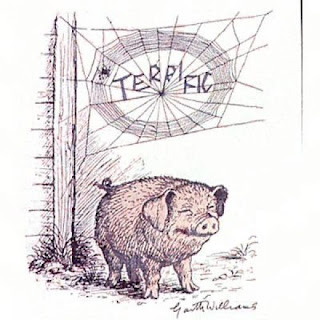 The situation can only be more dire in the case of the modern hog factory. The 2011 incident was not an isolated one. Gray foam explosions have been reported in several locations of great hog concentration, but the industry remains proud of its contribution to the American food supply. “Thanks to our modern methods, pork is incredibly cheap,” a spokesman said. “In some regions, some very fine butt can be had for pennies.” This happy circumstance is due to efficiencies of scale. Whereas pigs used to be raised on small family-run farms by picturesque workers in overalls and a feed store cap, swinging a slop bucket, these have been almost entirely replaced by the mega-piggery. The modern hog farm business model has thus been credited with relieving thousands of individuals from honest labor. And each factory is capable of producing a half-billion tons of ham a year from an average of two thousand proto-meat units after a brief interim still referred to colloquially as “life.”

Great strides have been made in redefining humane treatment. The proto-meat units are wedged in together under one roof, where they are protected from sunburn; they are administered antibiotics without co-pay; the young meat units are thoughtfully confined to their own crate, which protects them from being crushed if the mother-unit attempts to roll over in hers. Industry analysts are looking into methods of further enhancing proto-meat unit density in the barns by the topical application of Spam jelly for lubrication, which, they point out, is fully recyclable. 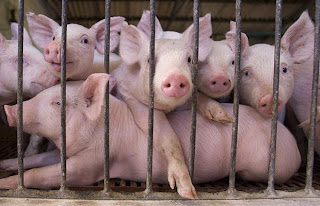 “We stand behind our work,” an industry spokesman said, standing in his office several hundred miles to the north. “The poop lagoon is, unfortunately, an unavoidable side effect from the ‘life’ phase of meat production, and while we continue to strive to reduce or eliminate that phase, it must be pointed out that the majority of our lagoons are still in a pre-exploded condition. We remain committed to maximum value to the consumer and profit to the shareholder, and we’re especially proud of our role in encouraging thousands of small hog farmers to explore new opportunities.” He directed further inquiries to the industry website. “There’s a lot of good information in there,” he said. Lagoons-full.