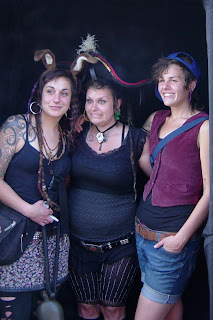 Something wonderful happened last week, and I couldn’t be prouder of Portland than if we all parked our Priuses and packed them with potting soil and petunias.

The occasion was a community meeting on the subject of Last Thursday celebrations on Alberta Street. Last Thursday was originally conceived as an artwalk, a monthly romp down the avenue that gives Alberta Arts District its name. The galleries hatched the idea twelve years ago and it has grown into a robust carnival. Folks lay claim to a patch of sidewalk and hawk their wares–everything from fine art to whatever they’ve managed to string together using beads, dumpster finds and paper clips while watching “Lost” from the sofa they’re surfing on. It’s not, shall we say, a juried affair.
Dave and I are at ground zero, four houses off Alberta at the end point of the parade, and we’ve enjoyed the atmosphere over the years–the clowns on stilts, the music, the tall bikes and the general revelry. We stroll past the card tables, dispensing brief grins. As Dave muttered after three blocks of displayed art, “This is the result of an entire generation growing up being told, ‘Heather, that is so wonderful! You’re so talented!'” Our pocket change is not in much danger. But folks are trying, folks are engaged, and we wish everyone the best.
Early on, during the time referred to as “the good old days” or “the rise of Gomorrah,” depending on whether you were talking to Dave or somebody else, there was even a good chance of random nudity. It’s a nostalgic sight for an old hippie mama, especially one who now recognizes that pride in the pert bloom of youth has always had more to do with this sort of thing than any spiritual freedom. Dave tends to be less analytical, but is similarly amused to discover that young white women still think dancing means twirling about like a fairy princess. As a form of expression, it’s not much more advanced than that old standby for four-year-old girls, spinning in place and pulling their dresses over their heads.
There have been complaints from the neighbors, though, with many objecting to the rise in public drunkenness, defecation, altercation, noise, litter, yard-piddling, and worst of all, the likelihood that someone will have parked right in front of their houses. This collection of outrages happens fully five days out of the year, once the cold and rainy months have been subtracted. The announced community meeting looked to be contentious, with the very future of Last Thursday at stake. 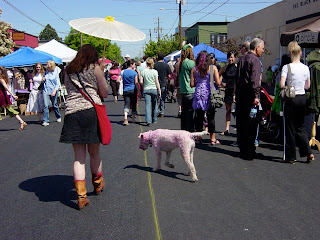 A team of volunteers fanned out with flyers announcing the meeting. Dave, who reports a renewed respect for letter carriers, distributed 350 himself. And when the meeting opened up, the room was packed to the rafters, with all seats filled and people standing five deep against the walls and in the aisles. Young, heavily pierced people bristled in packs; old, well-dressed folks who looked as though they would reliably refer to themselves as taxpayers dotted the crowd. Each regarded the other with suspicion.
Mayor Sam Adams, presiding, laid down the ground rules. To keep any citizen from feeling intimidated by the crowd, he instructed us to refrain from clapping, hooting, or making any noise at all. If we liked what someone was saying, we were to give them “jazz hands,” waving our fingers in the air. There was no suggestion for negative responses. The meeting got underway.
And then it happened. One after the other, citizens got up and spoke their piece. “Jazz hands” flapped all over the room. Occasional low booing produced a gentle reminder from the mayor, and eventually subsided altogether. The pierced contingent to my right, consisting of people slightly too young to appreciate the wonder of courtesy that was unfolding, could not contain occasional eruptions of dismay, but even they kept their threats of targeted yard-piddling at a low volume, and eventually relaxed. None of these had signed up to testify, but several were invited to the mike anyway, having worked up a head of earnest indignation in advance, and were indulged by all when they sailed well past their time allotment. For two hours and forty-five minutes, the neighbors of Alberta Street spoke in turn, listened to each other and waved their hands in the air like they were at Kermit the Frog’s family reunion. It was the greatest celebration of sustained civility I have witnessed in my entire life.
What is the sound of 3,000 fingers wiggling? Portland, baby. It’s no Tea Party.
This article, in an edited and probably tighter and better version, was published in The Oregonian, 2/14/2010, where it unearthed a very angry segment of the population in the comments section.
By Murr Brewster|2021-11-09T21:30:24-08:00February 20, 2010|Uncategorized|6 Comments