What We Have Here Is A Failure To Procreate

Out of four of us siblings, only my brother managed to eke out a child, and he totally didn’t mean to. Only a small part of him wanted a child, and that was the part that won the day. We’re all pretty thrilled with the results, though. My niece turned out way better than we dared hope. She, however, isn’t doing anything about having children herself–quite the opposite–so it looks as though this particular branch of the Brewster tree has gone stumpo.

Dave’s side is doing a little better. He has one sibling, and she, the rabbit of the family, produced two entire children, both of them top-drawer items. We two, on the other hand, have manufactured nothing, and at this point, if we do, we will have to gin up a whole new religion over it, which would be a tremendous bother. Ours was a conscious decision not to procreate. Genetically speaking, we were too likely to produce flatulent progeny with poor eyesight and no ambition, unless of course they rebelled, but we couldn’t take that chance.

It’s all worked out for the best. We have not been exposed to diapers or adolescent insolence, and no children have been scarred by our singular version of couth. The niece and nephew most likely to have been harmed by exposure to us have come through unscathed, if a little deficient in useful computer skills, and outside of the family we have also been able to collect a set of fine, pre-wiped, post-angst twenty-something friends through the ruse of feeding them or renting a house to them. We’re pleased. 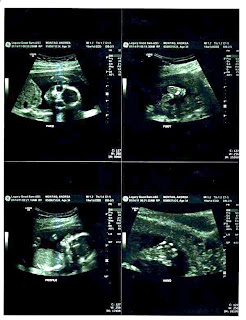 Now comes the news that the nephew has defied tradition by charging right out there and whomping up a whole new person. Yes, he is all set to produce us a brand-new baby, with invaluable assistance from his wife. For a family that could hold a reunion in the back of a Volkswagen, this is thrilling news indeed. Especially since there are a lot of good genes in play from both parties involved. This one should be a humdinger. We’ve already seen him–there are photographs. So far, he’s small, although not for his age; he’s black and white and shades of gray, with a grainy texture. He has nice flippers with very long fingers; I dream of a piano player and Dave fantasizes someone who can palm a basketball. Either way, we are standing by ready to instruct. Somebody else bags up the poop, right?