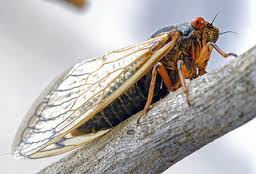 Much of the eastern United States is bracing for the deafening return of the 17-year cicada. The cicada lives most of its life underground. It could be worse. It is related to the spittlebug, which, as we’ve previously mentioned, lives in a nest of its own wet farts. The cicadas hatch in a tree but then drop to the ground and begin to burrow, finally staking out a homestead up to eight feet below ground, out of the reach of predators, until they start to feel safe again, which, depending on the species’ anxiety level, can be up to seventeen years. Then something compels them all to tunnel back up to the surface. This corresponds to the age humans are at their horniest, too.

In Greek myth, which for my money could take any religion in a cage-fight, a fellow named Tithonus captured the fancy of Eos, Goddess of the Dawn, and she asked Zeus to kindly make him immortal. Unfortunately for both of them, she neglected to request that he be forever young, and in due order he was stove-up and drooling on himself for eternity. At some point he was turned into a cicada, which made him easier to clean up after, but was still doomed to live forever, against his wishes.

It might have seemed to the Greeks that the cicadas lived forever, boiling up out of the ground at regular intervals and keeping everyone awake, but they don’t. In fact, if Tithonus is still miserably showing up every 17 years, he’d do well to park himself in the back yard of any Eastern subdivision, where veterinarians are warning people not to let their pets eat too many cicadas. They say “pets,” but they mean dogs. A cat isn’t going to gorge himself on cicadas. He’s going to bat one around for a while and then go off looking for rare migratory songbirds to murder. A dog, however, will totally eat as many of anything as he can stuff into the slobber hole. And their wrappers, too. The problem is with the wrappers.

Cicadas aren’t poisonous. The vets are concerned that the dogs will eat too many exoskeletons, made of a tough substance called chitin that is also responsible for keeping lobster meat together, and then the dog will get backed up something fierce, unless he is able to ralph up the bugs. Which dogs are certainly known to do. They will put anything in the pipe, and they don’t care which direction it goes. But a highly constipated dog full of cicadas runs the risk of a major gastrointestinal bug eruption in his latter years worthy of an Alien sequel.

It is my opinion that the veterinarians are hyping the dangers. Any decent sized American dog,

particularly a Labrador retriever, is not going to be done in by a little chitin consumption. I have seen a dog carry off a pair of Carhartt overalls and, when confronted, back into the bushes and swallow the whole thing. Then comes the agonizing hours waiting to see if it comes out bib first, or breech. But you can’t kill a Labrador retriever.  People have tried. Carhartt owners.