Whatever Could The “C” Stand For? 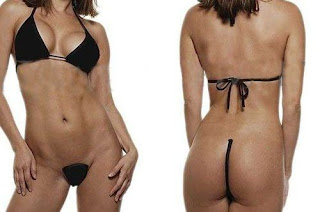 I’m not the expert. I could be a candidate for the show “What Not To Wear” based on my underpants alone. I don’t like my underpants and they don’t do anything for anybody else either. I even wear them inside-out to keep the seams and poky bits on the outside, which really seals the deal, aesthetically. But when I saw the new C-string, I found myself asking, “what is the point of underpants, anyway?” Not the new ones—the point of them is obviously right there up the ass, but what is the point of underwear in general?

The C-string is designed for women who find the thong too dowdy. Referring to it as underpants is like calling Roast Bacterium an entrée. It is an attempt to reduce the underwear to its most essential part. If you wanted a more minimalist approach, you could just knit your pubic hair in place. 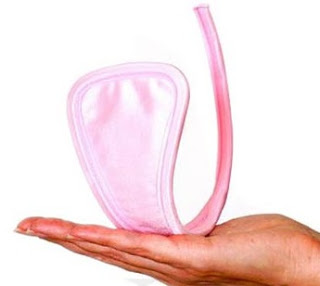 It’s sproingy, I assume. It snaps right into position, like some kind of crotch caliper. I’m not one to judge, but it seems to me we’re heading down a narrow path to a dark place here. Any underwear that needs to be tucked behind a hemorrhoid to keep it from going astray has a downside. I’m assuming the C-string shares some of the same technology with the underwire bra. And the underwire has a habit of working its way out, leading to sudden perforation, unexplained yelping, that sort of thing. If the same thing were to occur in the underpants zone, I would sooner admit to episodic Tourette’s than own up.

I did make an effort at modernity once. My friend Gina’s daughter had bought her a thong and she instantly passed it on to me. “It’s clean,” she said. “I only had it on for five seconds. You try it.” In spite of the warning implied, I put it on, found the hand-mirror, checked out the rear view, somebody screamed, and then the thong completely disappeared, leaving behind only a sensation I had not experienced since we got rid of the bad toilet paper. 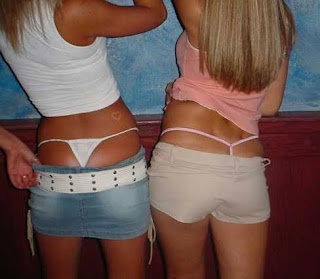 Enthusiasts of the C-string appreciate the lack of panty lines, which—they point out—even afflict thong-wearers. But any attempt to avoid the rear-view visible thong misses the entire point of it, which is to draw attention to a negotiable area of the anatomy in order to strike a deal. “I’ve got something in my pants,” the thong says, pointing, “that you might want to take a look at, and it will only cost you dinner and drinks.” The crotch-caliper goes at the same transaction even more directly: “I already am willing to plant a stick up my ass. What else might I be willing to do?”

On its face, I distrust underwear with a lot of engineering in them. I might make an exception for an edible chastity belt that required suitors to earn their way in. Otherwise, keep it simple.
Men’s underwear, if anything, is even odder. The briefs do seem to offer something in the way of support or confinement or hiding-away. I don’t have anything flapping around in that area, so I don’t know if perhaps a certain swaddling is a comfort. But boxers don’t seem to have any function at all. Boxers are the towel on the parakeet cage. Just something to throw over the occupants to settle them down. They’re there to let the wearer know there are even larger pants on the way. They’re like a training tool for the junk-whisperer: here’s a tiny, lightweight pair of pants, they say. Are we all right? Good? Okay now. Let’s try something a little bigger. Their main function is as a first-responder in a crisis flatulence situation.
Back in the day, it was popular to have underwear emblazoned with the days of the week. I can tell from my vitamin-dispenser that that wouldn’t work out well now. At some point I’d be wearing Tuesday and Wednesday at the same time to catch up. There really isn’t much of a point to underwear at my stage in life. Mostly it’s there to fend off the trouser seam when I bend over. With a long enough skirt, I know a way to get panty lines to plumb disappear.
By Murr Brewster|2021-11-09T21:16:29-08:00February 11, 2012|Uncategorized|147 Comments