When Death Approached: The Floofy Swan 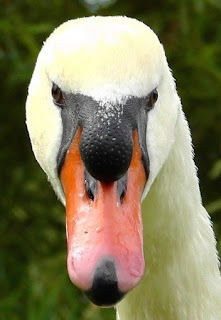 I might have been a little hard on ol’ Orlando Gibbons, there, the madrigal composer, who, after all, did write some mighty melodic songs. Sure, he whacked the bejesus out of that silver swan, but he also got in some pointed commentary. “Farewell, all joys! Oh Death, come close my eyes” is followed by “More geese than swans now live, more fools than wise.”

The bit about the geese and the fools is timeless. It’s every bit as appropriate now as it was in the seventeenth century. Doesn’t matter when you live, you can count on being surrounded by idiots. But I’m not sure it’s all that fair to the geese.

Ducks and geese and swans all roll off the same general template, the Anseriformes, with a lot of the same attributes, only in different sizes. I suspect the geese are assumed to be fools because they go off honking all the time, like a clarinet recital by first-graders. Gibbons’s silver swan, on the other hand, says nothing at all, a tactic that makes one seem wise, except in the case of Clarence Thomas. The silver swan sings a swan song upon her death and that’s the whole repertoire. At least, that’s what a lot of people believed.

But even Mute Swans make a racket. So it isn’t true. Not only that, but the song the swan supposedly sings upon death probably is no such thing, but the sound of its lungs collapsing and forcing air through its massive tracheal loop, with a coda later when the dead swan bloats up and the gas farts out. Much the same effect could be achieved with a bagpipe or accordion dropped from a high place, as has been demonstrated many, many, many times.

The other thing that’s not really fair is this idea that swans are all that wonderful just because they’re fancy. People think poorly of the goose but revere the big, white, graceful, fluffy swan. I know my sister and I admired one when we happened upon it in a lake near her house. “Look how beautiiful,” she said, as it floofed up and advanced smoothly toward us at the shoreline. “Get my camera,” she said, and crouched down and prepared to snap a tremendous close-up of the floofiness and regal neck.

And then the swan hove up and grobbed my entire sister and flang her in the lake.

To be fair, my sister was not at all a large person, but she wasn’t threatening anyone, and that swan was an asshole. We read up later and discovered that your fluffy swan is a homicidal swan, and you’d best keep your distance until it sleeks back down. Basically, it’s no improvement on an irascible goose, except it’s bigger.

I will admit it didn’t sing a note. But that’s just because it’s sneaky.

Historical note: I didn’t write much of anything for about thirty years, but interesting turns of phrase appeared in my head often enough that I thought of myself as a writer. I never wrote any of them down, but I did remember the one about the swan and my sister, and I thought: some day I’m going to put that in something. So I just did.