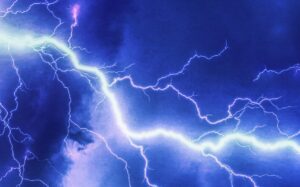 Seems like after 4.5 billion years the planet would have run through all the possible meteorology by now and wouldn’t be whomping up new weather, but in addition to bomb cyclones and atmospheric rivers, we now have megaflashes. If they discover a Great Red Spot around here it’s not going to come as a surprise to me.

Unlike the ordinary mannerly lightning that comes to ground and fries the occasional golfer, megaflashes are gigantic masses of horizontal lightning that travel orgiastically across the sky for great distances and for significant lengths of time. For instance, a 477.2 (point two!)-mile lightning megaflash was recently recorded stretching from Texas to Mississippi. God as usual could not be reached for comment and his intent remains a matter of speculation, but these things generally occur in the red states.

They also generally occur at night. The proximate cause of these massive platters of lightning is a pair of weather satellites, GOES East and GOES West. Prior to their launching, the events were nearly unknown. If lightning lit up the skies over Thackerville, Oklahoma and concurrently in Burlington, Kansas, an event which has not been hypothetical since October 13, 2017, nobody really put it together. But now, thanks to new geomenopausal detection systems, we can.

The phenomenon is significant even in areas not directly affected by the nocturnal megaflashes. For instance, in the Oklahoma/Kansas event, Arkansas was a little leery of setting anyone off, and neighboring Missouri didn’t get any sleep at all.

The Thackerville event was described as being four times larger than the state of Connecticut, a helpful analogy for those whose only acquaintance with the Plains states is from 30,000 feet up while watching Shrek on a tiny screen. It sounds impressive, but Connecticut is an itty bitty state. They might equally well have said it was 4/5ths the size of West Virginia, but that is problematic. Connecticut is nearly rectangular and its square miles stay more or less square, whereas West Virginia’s are squiggly. Moreover, we’ll need an extra satellite to keep up with the area of West Virginia since they keep lopping off their mountaintops in order to get at a month’s worth of coal and poison their water for all time. Really, in square mileage as well as in Congressional representation, beautiful West By-God Virginia is more of a cautionary tale.

We might equally well describe this megaflash as being zero-point-eight percent of Alaska but that just makes it sound pitiful. Alaska probably loses track of that much territory in earthquakes every month. And has Northern Lights besides. Alaska spits on your lightning storms.

What is true is that these megaflashes have been breaking records ever since records were kept, which is a little under six years.

Thunderstorm experts warn that any time you hear thunder, you should get inside, or stay in your car, hovering near the gearshift, and don’t touch anything, not even yourself, which is good advice anyway in polite society. Specifically, they caution that lightning can appear to come out of the blue, ten miles distant from any observable storm, and incinerate you where you stand. Now that we know one lightning event can encompass nearly five hundred miles, the protocol is: if it’s thundering in Alabama, pop indoors in Tennessee.

Of course, this is because everybody’s already indoors. On their phones. In their pajamas.