Got a message the other day. “Do you get Birding Magazine? There’s a Murrelet in there.”

I hadn’t gotten the latest issue but I wasn’t surprised to learn there was a murrelet in there. That’s where I’d expect to find one. As opposed to, say, Sports Illustrated. Not an actual murrelet. They’re small enough, but not flat enough. I figured there’d be an article about the Marbled Murrelet.

They’re incredible little birds. In a world wherein we might assume we’ve found out everything by now, the murrelet’s life has remained a mystery until very recently. They are sea birds, but they breed onshore. Somewhere. It took a lot of legwork and time, but a dedicated group of scientists finally discovered they nest in the very highest parts of very old and very tall conifers. They find a small cushy platform of moss or lichens swaying way the hell up there and they pop out a single egg on it, sit it for a month, feed the baby fish for another forty days, by flying fifty miles to the ocean and back at least twice a day, and then the baby up and flies to the ocean by herself, if she’s so very lucky to still be alive. It’s a tough road. And if there weren’t a hundred other reasons to leave those Pacific old-growth forests the hell alone, that would be enough, right there: murrelet eggs, on a high moss cushion. 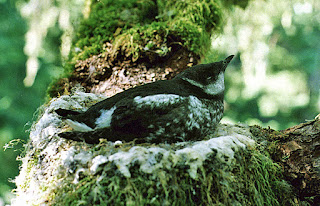 Yeah. I read a whole book about them. But that wasn’t what was in the Birding Magazine. Instead there was an interview with a surpassingly cool woman named Murrelet. Murrelet Halterman picked her name out herself.  She’s another Mary slid sideways. She was flipping through the bird book and picked that one out for a nickname, figuring “it was enough like Mary that her parents wouldn’t notice.” A different woman might have gone for Robin or Lark, but clearly Murrelet has a certain kind of class. Also, she is a nutcase. I like that in a person.

My own Mary name slid sideways without my intervention. It’s easier to report that my college friends were too stoned to pronounce Mary, but it’s not really true. What happened was my friend Walter and I were pretty much the only Southerners in the whole college, which was populated almost entirely from New York, New Jersey, and New England. Walter was from Atlanta. This was the closest either of us was ever going to get to feeling ethnic. We started drawling in each other’s company just for drill and solidarity, and it proved contagious. Pretty soon everybody was saying things like “Turrible, turrible.” (We opted for Walter’s more adorable accent. Nobody wants to hear the version from Virginia, where my name would be pronounced “May-Ree.”) Thus and then I became “Murry.” And eventually “Murr,” because my friends were too stoned to…well. Anyway.

I was certainly not going to spell it Myrrh. Too fancy. And I had no idea that there was such a bird as a Murre. I wasn’t a birder. Forty years later, when I joined that fraternity as its least adept member, it was too late. Theoretically, since Mom didn’t name me Murr, I could add an “e” whenever I wanted to, and some of my friends do out of affection. But by now it feels like putting on airs.

In any case, Murrelet and I aren’t all alone in this. My Dave married a girl just like the girl who married dear old Dad: Mary Alice Price.

Her friends called her “Murry.”