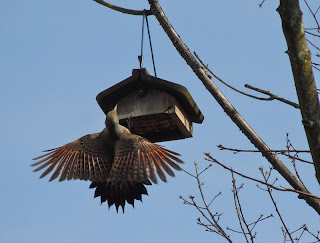 It’s spring, and a woodpecker is hammering away on the neighbor’s tree, checking for bugs. It’s likely either a Downy or a Hairy woodpecker, which differ only slightly, but even novices can readily tell them apart by asking a real birder. Sometimes they hammer on a chimney. There are no bugs in there–they’re trying to attract a mate. The flicker that likes to drill holes in our house succeeds, at least, in attracting Dave, and he’s not easy. Well, yes, he is easy. Still, woodpeckers are attractive. 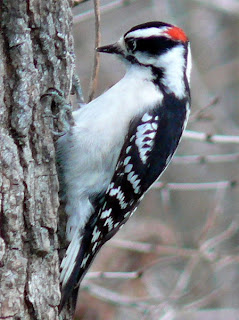 The males in particular are often crowned with a bright red patch which they use as a sexual signaling device. They also have short, stiff tails that help anchor the bird to the sides of the tree while he’s hammering and support him while he’s climbing. Humans lack this and must resort to a crotch harness, which doubles as a sexual signaling device.

Many people wonder how the woodpecker avoids brain damage while he hammers away. Bird experts (“ornithodontists”) point out that, for one thing, he has a very small brain. So he’s utilizing the same sort of evolutionary stratagem that protects humans from debilitating tail injuries. I’m not sure I buy it. Although it is true that brains and peckers are rarely associated, the real reason woodpeckers don’t get headaches is that their children all leave the nest in under a month. 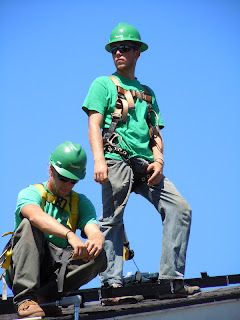 And they don’t have a lot of room for brains, because they need to free up the space to store their tongues. Many species of woodpeckers have a long tongue for exploring cavities and retrieving insects and sap. Then they have to reel it back into their heads so as to remain properly aerodynamic. So they run it up the backside of their skulls and tuck it in at the nostrils. Hummingbirds have a similar design. When they make little hummingbird yummy noises you can see the tongues go back and forth over the top of their heads. I’d like to think that the ability to ripple your head when you’re happy could be a sexual signaling device, although for hummingbirds, which also have little fingers on their tongues, that might be gilding the lily. I know if a human were to develop little fingers on his tongue, word would get out.

Creationists, or proponents of Intelligent Design, are people who are more comfortable with mystery than knowledge, and they like to point to the woodpecker as being an example of Irreducible Complexity, proof that God had to have stamped it out whole, perhaps from a perceived shortage of time. As evidence, they point out that the woodpecker’s tongue is anchored in its nose, which is not true, and that only God would think of doing such a thing, which might be true although we’ll never know because he didn’t do it, and that (most importantly) it directly contradicts Genesis, which is undoubtedly true, end of story, amen. 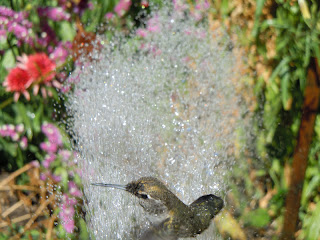 In reality, mutations can result in structural changes whose functions change over time, or fall into disuse. In humans, a hallmark of our evolution is our large brain, which allowed us to fashion tools and develop strategies and acquire knowledge so that we were able to achieve considerable success in spite of our physical weaknesses. Now, in many parts of the population that prefer mystery to knowledge, the brain is no longer being used much except as stuffing so our hats don’t fall off. Only time will tell if this is a useful adaptation. I plan to keep exercising my own brain, just in case I need it later. Or at least until I can ripple my head.