You Make Your Own Electroluck 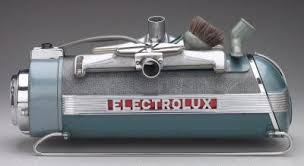 You hear it said that there is no sound in a vacuum, but that is not true. One of my earliest memories is my mom’s Electrolux canister vacuum and it was plenty loud. I was very taken with it. It was gray and silver and red and it slid around the floor on little sled runners, and I’d be right behind it, on my hands and knees, scrunched up small so as to get the maximum benefit of the heat coming out the back. It was always cold in that house, seemed like. Mom must have gotten a kick out of pulling that vacuum cleaner with me scootching along behind like the rear end of a caterpillar, because otherwise maybe she’d have put a sweater on me. The grownups probably thought it was plenty warm enough in the house, but warm air rises, and when you’re really little you can only rise so far.

I’ve heard that vacuum cleaners can easily be made to run quietly, and are in Europe, but in America the quiet ones don’t sell because we think they can’t possibly be doing anything. I still like the sound of a vacuum cleaner. It reminds me of innocent youth and a mommy who loved me very much, just not enough to put a sweater on me.

What they really mean is that there’s no sound in a place with nothing in it, because there’s no medium for the sound wave to travel through. You need Stuff for sound to wobble around in. Like dust in a vacuum cleaner bag. Or, you know, air molecules.  So sound is produced by a pressure wave moving through a medium. (“I summon the ghost of Juliet’s grandmother,” it might say.)

And that means it’s very quiet in deep space. Once you’ve slipped the surly bonds of Earth (all the noise makes it grumpy) and there’s nothing to bounce light off of or prod into a wave pattern, it goes black and silent. It’s only because we’re living inside a layer of planet-batting that we can hear anything.

But that doesn’t mean nothing’s happening out there. There are major furnaces operating in space and stuff blows up and, by rights, it ought to be deafening. But it isn’t. NASA recently made a sound recording of the sun. They had to cheat to do it. And then they had to compress several days of recordings into a few seconds. But they caught the sound of a major coronal discharge, which the sun has a lot of.

The sun should have that looked at.

When I was little, the neighbor man asked me: if a tree fell in the forest and nobody was there to hear it, did it make a sound? He wanted me to get existentially challenged thinking about it, and he was all ready to pounce and say “But how would you know?” as soon as I made either choice, but instead I said “Well, I guess it depends on if you’re thinking of the sound as something the falling tree makes, or it’s something we hear in our ears,” and I think that answer made him grumpy. The thing about the tree is that if it fell in a forest containing no air–and it would, trees need air–it would not make a sound, except through the molecules in the ground it hit.

Anyway, the universe is full of potentially noisy items that we could hear the hell out of if only there were air, so it’s just as well there isn’t. Still, I like to scrunch up small and look at the sky and imagine it humming and crackling and farting and making great hoots of celestial laughter. Why not? Makes me warm.