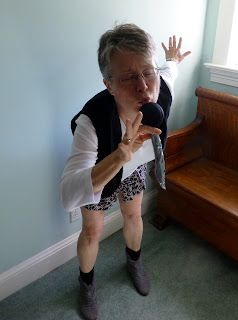 The push to become a famous author isn’t moving along as quickly as it might, so I have decided to start singing my way into people’s hearts instead, yo. I can’t actually sing all that well, but there may be ways around that. After all, there are millions of things in print that are worse than what I write, so maybe it works the same way with singing. As I see it, there are two entrees into the world of singing fame: American Idol and The Voice. American Idol would require me to get too close to that scary-ass Nicki Minaj, whoever she is. She has a speaking voice like the last rales of a roadkill platypus, but supposedly she sings. I don’t know. American Idol isn’t my best shot anyway because I’m at least thirty years too old to idolize. On The Voice, I can try to sneak in during the blind auditions, when the judges have their backs turned and won’t be able to see me at all. That’s my best side.

The most important rule in singing is that the shortest distance between two notes is to be avoided at all costs. The more notes you can jam in, the more points you get. I can’t sing like that, but it’s not mandatory, if you can instead demonstrate some kind of quirk. My quirk will be trying to cover every song using only three notes either side of middle C, since those are the only reliable notes I have. 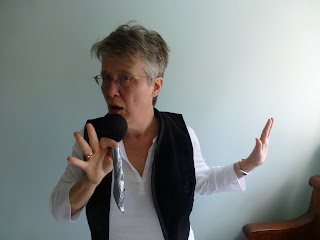 I’m starting to construct my back story. This will be presented in a two-minute video before my performance, so it’s important to get it right. I don’t have a lot to work with. True, my parents are dead, but that just means I can’t say I want to win so I can buy my poor mama a house. I don’t have any diseases that I can get a doctor to agree I have. And there’s no one in my life who is depending on me. I’ve seen a man explain that he has to win the contest or else keep working for a moving company, like that’s the worst thing ever, and that’s too pathetic for this blue-collar girl. Recently a teenage contestant on The Voice admitted, through a brave, straight, white smile, that she had once suffered teasing for her crooked teeth. I know how awful that can be. I used to get it for having hairy legs and knee socks the year I missed the nylons memo. But that’s all she could come up with. She’s going to have to sing her fanny off to overcome that sorry back story.

Of course, I’ll have to practice. This week I’m going to work on the double fist-pump on the heart until it looks natural. Next week I’ll lean forward with the mike in one hand and the other arm stretched out behind me. Squinting is next, accompanied by the repetitive three-finger flutter on the mike hand, like a stuck butterfly. I’ll have to hire someone for makeup. And I’m going with cowboy boots and a tight skirt an inch below my ass. I’m going to have to check where that is now. 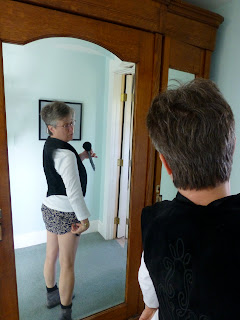 Then all that’s left is the song. The most important thing is to choose one that’s in my wheelhouse. So first off I’ll look up “wheelhouse,” and then try to locate mine, and see if there’s a song in it. Then I plan to give it my all. The goal is to be a-mazing. If you can’t be a-mazing you have no business trying, but fortunately it’s not a high bar. A-mazing is just a notch above crazy good, and there are no other superlatives beyond it. And there are several ways of being a-mazing. You can bring it, or you can own it, or you can leave it all out on the stage.

Finally, no matter the outcome, I must not veer off the correct expression of gratitude to the judges. Currently it is “thank you so much.” Not “very much,” not “I appreciate it,” not “thanks a lot.” Thank you so much.

Thank you so much.