Cleaning Off the Sundries 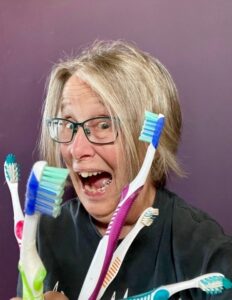 Is your head compostable?

That’s what the ad in the margin of the website said.

My head is, I’d say, mostly compostable. It’s almost all goo inside, and that breaks down in a hurry. Most of my head could be vulture poop in a matter of hours. Except for the container, which hangs around a long time unless someone takes a mallet to it, but mine’s unusually small.

This is about the time it occurs to me to check to see if I misread something. I caught the question out of the corner of my eye, which is where I keep sleep crud and internet advertising. The compostable head they were referring to belonged to a toothbrush.

It was an electric model, and inasmuch as you’re instructed to swap out the brush portion of those on a regular basis, they decided to render it out of sustainably sourced cornstarch. The bristles were made of castor oil. You could mail your tired toothbrush heads back to the company for free and they’d see them to the ground.

I’ve always had the notion that electric toothbrushes were a little fancy and weird. I never thought it was too much to ask of my muscles to brush my teeth. The idea that one should instead stick a battery-operated version into one’s face feels lazy. What’s next? Stick it to the wall so you can just walk into it with your hands in your pockets? They like to say their little rotating bristles do a better job of cleaning but I figured that’s just advertising. Evidently, the professional dental world says it’s so, though. I can imagine spending more time with my toothbrush if it vibrated, but it wouldn’t necessarily be in my mouth.

Modern toothbrushes do a lot more than swizzle around. The cornstarch model also has a built-in tongue scraper and haptic notifications. So many questions: I never heard of a tongue scraper and up till now hadn’t felt the lack. It’s like finding out that people use toe floss or nipple levelers. Have I been missing out?

And what are haptic notifications? Is that a portal to the beyond? Can your contact your ancestors with it? Turns out haptic notifications are sensory signals related to touch; for instance, your device might vibrate to let you know some way you’re not living your best life. I couldn’t think of anything important I might want to learn from my toothbrush, though.

Well! This toothbrush lets you know if you’re brushing your teeth too hard, which could scour your gums clean away. Or, you might get a haptic notification to let you know you’ve achieved your ideal two minutes of brushing. The higher-priced model will alert you every thirty seconds so you know to move from your top right teeth to your top left teeth and so on through all the quadrants.

The top of the line has Bluetooth technology, which really seems wrong for a toothbrush, but it’s too late to do anything about an innovation named after a thousand-year-old Viking with a dead tooth. With Bluetooth your toothbrush can rendezvous with your phone and give you real-time feedback on your brushing technique. Your phone can cheer you through the recommended two minutes like an exercise trainer and also let you know if you missed a spot. Naturally, this toothbrush comes with a phone holder you can suction onto your bathroom mirror.

If I bought this toothbrush my phone-app diagnostic report would probably spin in place for a few minutes gathering historical data and then scold me up one side and down the other. I have not only tried to stay under $300 for any one toothbrush purchase, but I may never have bought a toothbrush in my life. Not only that, I might still have all my old toothbrushes, because after I get a new one from my dentist, the old ones go under the sink to polish faucet fixtures or scour bird feeders for the rest of their days. I can’t throw them out. They’re not compostable.

Which means my electric toothbrush might come with dope-slapping technology. A little fist would lunge out of the mirror and thump me on the forehead.

And let’s back up just a minute. Tongue scraping? Sure, it sounds like fun, but so does belly-button lint removal, and everyone tries it in the shower once or twice, and it’s totally not a good idea. Some of your bodily crud is serving a purpose. It might not be a good idea, as one advertisement from a non-native English speaker says, to “maintain oral health and clean off the Sundries.” Does the tongue scraper come with haptic notifications and helpful hints? Can you comb your tongue to each side with a part down the middle like Alfalfa? I’m not interested. I’m going to wait until they make a little robotic tongue-scraper that works like a Roomba the size of a Tic-Tac.

I’m just old-fashioned. Any time I feel like my tongue has gotten unacceptably fuzzy, I like to scrub it with a little potato-chip salt. Or, you know, a lot.