Cobble, Discarded Humans, and Other Detritus 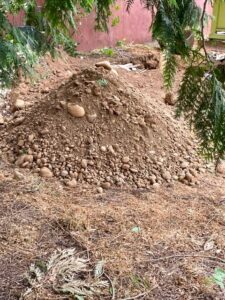 An impressive pile of potato-sized rocks squats in a corner of my yard. This is what we gardeners deal with on the north side of the Alameda Ridge, a tiny smudge on the NE Portland map. Dig anywhere around here and this is what you’ll find. The cobble came to us courtesy the great Missoula Floods, 15,000 years ago. They were large enough to have relocated major components of Montana and Washington to the Willamette Valley here in Oregon. Those aren’t Montana nuggets here on our plateau, though. We’re living on top of a flood-driven gravel bar of debris scraped off a nearby volcano, and the whole thing petered out around 15th Avenue.

So just as soon as you pop down the hill twelve blocks south of us, your garden soil has the tilth of navel lint from a panda bear. Flung seeds root on the spot and plants bound into the sky out of sheer glee. This is why the real estate in the Irvington neighborhood is so much more valuable than ours.

Not really. If you live in Irvington, you’ve probably got a landscape crew taking care of things. You don’t know from cobble.

The real reason our property has always been considered less desirable is there was some historical possibility that you might—shhh—have a colored neighbor. It wasn’t likely, but in Irvington you could totally rule it out. So prices here were low. That’s how I was able to buy a house in 1978, after less than one year as a mail carrier. That, and the interest rate was 10%. If you had your eye on a house for sale, you could mull it over for months. Nothing was moving.

Our house had been continuously occupied by white people of the same family since 1906 and we had no Black neighbors at all, so I’m not sure we contributed to gentrification. Still, there began a general migration of Blacks to the outer burbs beginning around 1990 as our once-maligned area began to get up a little buzz and eventually some actual cachet. Iron window-guards fell away, empty blocks filled in, and now we’ve got a vibrant neighborhood full of earnest liberals, plus a salting of people complaining about police response and disheveled pedestrians on NextDoor.

And our $35,000 house, after losing half even that value in the ‘Eighties, is now soberly proclaimed to be worth a million or so. “Worth,” in this sense, meaning that a random buyer who isn’t any more nuts than anyone else might offer us that for it. Which doesn’t make it not nuts.

We didn’t do it, I swear. It’s just in the nature of rivers.

A mighty big river shaped our plateau and its composition. But another equally mighty river is shaping our world now. It meanders, it probes the soft spots first, and eventually it overwhelms its banks. It’s a river of money and it starts in the high peaks and pushes into the flatlands, leaving some perched up top with a good view and others piled up like trash at the shore.

Americans have been conditioned to believe great wealth is both desirable and a sign of virtue. There’s no real evidence for either, but it does help rationalize a tax structure designed for the obscenely wealthy. It would be quite possible to create a system that flattens the income gap, that encourages a large thriving middle class, that supports the poor, and that still allows people to become rich. We had such a system for decades, last century. But why should we care if people are allowed to accumulate more wealth than entire countries, more than they can spend in a hundred lifetimes?

Because now we have people so well-off they don’t have to think twice about offering someone hundreds of thousands over the asking price for a house, leaving hard-working people who have saved for a now-laughable antique 20% deposit high and dry. And then the river pushes into the slightly less desirable neighborhoods and then into ones like ours, and anyone who has worked hard for a wage that hasn’t kept up is pushed out to the outlying areas, with their food deserts and lack of public transportation; and those who can’t afford even that wash up as so much detritus stranded on the banks in tents and RVs. All of this in a decade or so.

And now the discarded human trash that should shame us serves as a poster for those who insist people just don’t want to work anymore, and who continue to imagine that it is our modern pirate class that needs our praise and our protection. That’s a lot of cobble to push through.