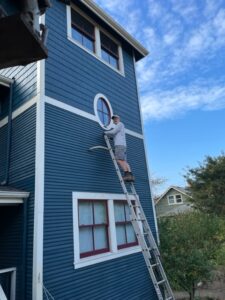 Not sure exactly how our house addition ballooned to its current size—I blame childlessness and lack of impulse control. Anyway, we tacked on about 1700 square feet to the place over 25 years ago, including a third-story tower just for fun. Now, we’re trying to keep it all stuck on. Fungi have moved in and are razing the place for their own subdivision.

I didn’t catch on real quick. The signs were there, and I actively ignored them for a good long time. Due to an error in flashing for a one-foot-long gutter, our winter rains were being sluiced directly behind our siding for years.

Still, something about the sheer massive scale of the calamity caused my sensible side to shut down altogether. My own brain stuck its fingers in its ears. Then a plant started growing out of the siding fifteen feet up. A nice bleeding heart, it was. When it started blooming, I was forced to strike up an acquaintance with reality. Virtually the entire north side of the house needed to be replaced.

Then one of our tower windows rotted out and could not be repaired or swapped out—it had to be re-fabricated. The fabricator was danged proud of his work, if his invoice is any indication.

Then this summer I belatedly noticed the pertinent windowsill also had problems. Specifically, it was a rubbery layer of paint with a bunch of air beneath it. Once I started poking around, my finger went in up to the second knuckle. Two men went up there with Bondo, a pencil, and a cereal box, and now they’ve fashioned a special metal sill to go over the top of it like the plate on Hank Williams Jr.’s forehead that keeps his brain from leaking out. Haven’t gotten the reckoning yet. 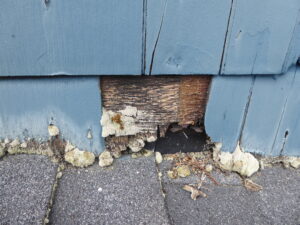 It’s probably a lot of things. It’s that the only standing timber we still have left is on fire, it’s that some tiny-pricked dictator invaded Ukraine, it’s that 28 years are in the rear-view mirror, but the fact is all these efforts to keep our house from shlorping into the earth have already cost a sizable fraction of what the whole addition cost originally. So now I’m paying attention. If the neighbor doesn’t have his music cranked up, I swear I can hear fungal mycorrhizae on the march. Tiny wicked crackling laughter. Heh heh heh. Heh heh heh. It was no doubt what led me to look up at the base of our nearly inaccessible oval window. With binoculars.

Awesome. I located a handyman neighbor with big balls and an extension ladder, and he popped up there to do triage and came back with photos. Rotten at the base. Rot beginning to go into the sash. I do not know what sort of surgery would be required to replace an oval window. I do know it would be major, would cost a down payment for a trip on SpaceX, and I personally would need to be anesthetized.

Neighbor with big balls was dispatched for the rescue. He bounced around on that ladder for about five hours with an assortment of surgical instruments and magic goo, and now my window is fixed. Fixed, I say, before all was lost. Today the rains have begun. I can’t hear the fungi over the pattering, but when it dries out, next June, I’ll be listening for squatters.