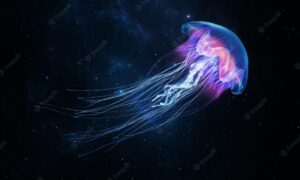 It’s only natural to wonder just how old a critter can get. How long is a life?

It depends on how you look at it. The Immortal Jellyfish, for instance, has a really good run going. Evidently if the jellyfish is threatened or harmed it can revert to an earlier stage in its growth—a mere polyp, poinking out a stack of new jellyfish clones nested like Pringles—and then it can snap them off into the sea, where they can start all over again, with all the same DNA, and maybe hitch a ride on a ship. And so now there are genetically identical jellyfish all over the world. Does that count as immortal?

It’s a little diffuse. It isn’t what we’re looking for in longevity, because we feel special. Our interest in longevity is only the desperate, grasping need of our own personal consciousness to hold on forever. But all the reincarnation in the world means little if we can’t remember our previous glory, stitch our existences together.

An astonishing number of people who have delved into their prior lives have discovered they were once Charlemagne. Charlemagne must be the immortal jellyfish of humanity, but did he care? He did not. He may have been the Father of Europe but his lungs crapped out like any peon’s and he had to settle for a spot in Catholic Heaven. It’s one way of living forever but still fills the honest heart with doubt.

So what we want to know is how old is the oldest existing critter? How old can things get? By which we mean: How old can we get?

Sponges probably clean up in that department. But they’re not relatable. They’re all squish. They need eyes or feet or something.

Tardigrades are more sympathetic and adorable but contrary to popular opinion they don’t live forever. As it turns out, they live only about two and a half years if they’re happy. It’s when conditions really deteriorate that they squeeze all the water out of themselves and continue on almost indefinitely in the form of little tardigrade crackers. They can be boiled, frozen, irradiated, dried, or blasted into space. An Acme Safe can fall on them from six floors up and they’re just fine. All they need is to be re-dampened and they spring right back up and start looking around for tardigrade kibble. The oldest tardigrade fossil ever found was encased in 16-million-year-old amber. They chipped it out and spat on it and it was right back in the game and died 2.5 years later.

But that isn’t what we want in a long life. We don’t want a long stretch of dessication with a couple good years blinked into it.

So consider the Greenland shark. Humans have nothing to fear from them. This is because they live in deep Arctic waters and we don’t. They do eat stuff. One was found dead with an entire reindeer inside it. It was probably the antlers that did it in. But some individuals might live up to 500 years. They know this because there’s an original birth protein in their eyes that can be carbon-dated. Scientists report these sharks are nearly blind but they might not have been counting the ones they hadn’t stabbed in the eye for science.

Even the shark doesn’t take the tiara. The oldest individual critter we know about so far is Keith Richards, the clam. Not really—they named him Ming, after the dynasty in which he was born. He was 507 years old, as determined by the number of layers in his shell. He was collected off the coast of Iceland in 2006 in deep frigid waters. “Collected,” by the way, is a scientific term meaning “killed.” No sooner had this magnificent ocean quahog been hauled up that scientists began wondering how old it was. So they froze it to death and started counting layers. “Huh,” they said, totting up, and marking down a birthdate around 1499, “Wonder how much older these things can get?”

We won’t know until they kill some more.