There’s Tilth To My Filth 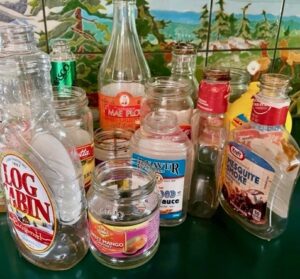 It’s not so much that I can’t live with a filthy refrigerator. Clearly, I can. I do not have the powers of imagination that motivate most people to clean. I figure if I’m still healthy after all these years of not closing the toilet lid and conducting longitudinal fungal studies in the fridge, it can’t be all that dangerous.

So I think it was because someone was coming to visit that I saw the fridge with fresh eyes, as it were. And those fresh eyes were appalled. My friend Linda is the exact opposite of fussy. But she is more of a grownup than I am. And when it comes down to it, I was kind of curious what all that orange slime underneath the vegetable crispers was. I mean, how did anything even get under there? 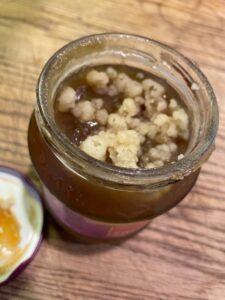 The shelves in the door seemed like the place to start. Condiments! Condiments are little bonus add-ons for your regular food, serving the same purpose as hats and humor in people. But a lot of them are a puzzlement. The top shelf had the condiments I use most often, unless they were tall condiments, in which case they had to go below. The top shelf also had other shorter items that we never use. They are probably invasives. Below the top shelf are your legacy condiments, and below that yet are the ones with so much seniority that they have had permanent tenure. But after cleaning the top shelf, I got a wild hair and decided to investigate.

It was an actual wild hair and even I draw the line at that. 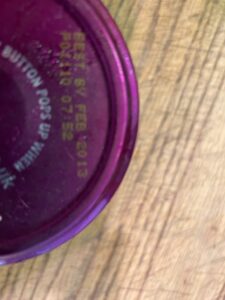 Oh, it would have been easier in the old days, when we could just toss things right into the garbage can without even opening the jar. Now we recycle everything and the garbage people, who of all people you would think would not be fussy, insists we remove all traces of food in our containers. Some of the stuff slid right out. Some did not.

Observation: a large subset of the condiment collection, upended into the sink, looks like baby poop. We do use mustard a lot. Apparently we do not use all our mustard. It might be possible to spoon out some of it from the legacy shelf but the tenured mustard is going to take a Dremel tool. Or a chipping gun.

You know that old saw about going through your closet and giving away all the clothes you haven’t actually worn in a year? Even if they fit you once? Yeah, that doesn’t happen either. It’s worse in the condiment shelf. We’ve saved stuff we’ve never used and never will. It’s so old it’s in glass jars from the pre-plastic era. Some of it is in pretty little glass jars with bows around the lid and hand-lettered labels. Lovely people we love make lovely things and give them away at Christmas and if you can’t regift them immediately, it only seems right to put them on display in the refrigerator for fifteen years or so. 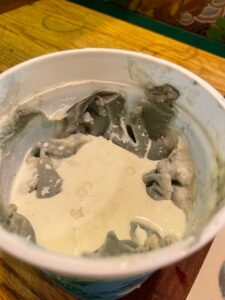 Neither of us eats jam. We can prove it.

The very bottom shelf contains items celebrating the tenth anniversary of their expiration dates. One of them advertised itself as some sort of chutney, which is a term for vegetarian offal. One of them inexplicably involves oysters in some fashion and I’m keeping that because I’m afraid to open it.

The door of the refrigerator was looking gratifyingly clean. I could no longer put off the crisper drawers. The one I keep my limes and lemons in just needed a little wipe-down. The other one? I don’t know what-all was in there but I’m using it for mulch.

So. Under the crispers. Whatever it is has had every expectation it would remain unmolested in perpetuity, and showed it. Squatters everywhere. Eviction took longer than it should have, as eviction always does. We just got a new garbage disposal and it’s quivering under the sink like a rescue pup that is just getting the idea he ended up in the wrong home.

I made my way up. Good Lord, a half bottle of Log Cabin Syrup. I haven’t had any of that in forty years and I apologized to the entire genus of maple trees when I poured it down the sink.

I stopped short of the top shelf. You have to bend over to see how bad the top shelf is. But Linda reads this blog so she’s probably going to have a look at my refrigerator, even if she wouldn’t’ve otherwise. I’ll get to it. AND the freezer too, okay. Okay. Friends. They’re worth it.