The Land Of Linda 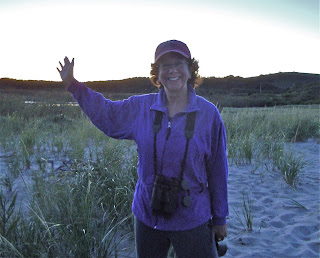 How can you tell you’re on vacation when you’re already retired? One way is to travel in the Land of Linda. My friend Linda is a woman of unusual buoyancy. It’s not that she’s been untouched by sorrow, but she is always finely attuned to delight. This is a magnificent planet we’re clinging to the skin of, with many rewards for anyone with good wonder receptors. Linda’s are top-notch. If your own are undeveloped or vestigial, you’re well advised to hitch up to Linda’s wagon and wait for marvels.

Linda learns as much as she can, which helps, but some of her powers may be genetic. It is her father Gerry who owned up to arranging for our phenomenal weather on a recent trip to Cape Cod. Per his instructions, Hurricane Earl slouched off shore after a mild rinse-and-scrub, dropping off  some spare birds. Cape Cod itself is the afterthought of a glacier, a beckoning finger in the Boston harbor with shiny Provincetown at the fingernail position. Four of us (including the wildly entertaining Sara and Kelly) ventured in, and the house Linda rented on our behalf was a five-minute walk from the ocean and came complete with filled bird feeders. Our first night there, I poked my head out towards the sky for a nanosecond and a meteor pierced the Milky Way. None followed, but that one gleamed like a pin in the map of Linda Land. It was time for adventure, time to load images onto our retinas for future dreams. 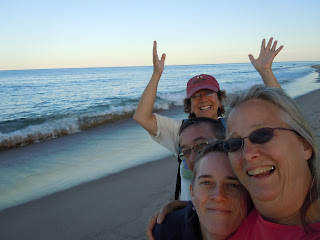 “That dragonfly over there is carrying off a hummingbird,” Linda remarked from the Adirondack chair, and sure enough something with the silhouette of a winged golf ball zipped by. I did not and still do not know that dragonflies have hummingbird-carrying capability, but there is a whole world of wonders out there, more than you can jam in your head in a lifetime, and isn’t ignorance a wonder in itself? The kind you’re aware of, at least. Why, at any moment you can hope to be enlightened about some microfact or other that can take the top of your head off. I live for those moments.

Sitting in an Adirondack with a cup of coffee as the morning light fingers through the trees, I begin to dial in my own wonder receptors. Traffic is heavy in the commute to the bird feeders, and as time warbles on, layers of life-sounds sort themselves out. A Ford Intrusion bellows by, dull as money, but in its rowdy wake, the splendid planet reasserts itself. 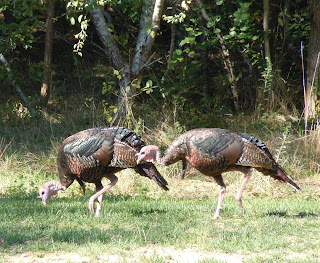 A small wedge of that splendor is available to anyone willing to pay attention, and another wafer to anyone willing to pay for binoculars. The heads of hummingbirds ripple with their sipping tongues. Life, death, tragedy and romance play out under a single leaf. It occurs to me, as my personal clamor subsides and gives way to the natural music, that meteors are slicing through the sunny sky right then and there, joining the list of marvels outside my narrow perception. I register a scant movement in my periphery and turn, and the forest begins to extrude hadrosaurs. One, two, three hadrosaurs leak out into the meadow in search of cracked corn–thank you, Linda–and resolve, upon further review, into turkeys, readily identifiable from the construction-paper versions we made in first grade, but the size of furniture. They are followed by ten more junior models and then they evaporate into the woods again. 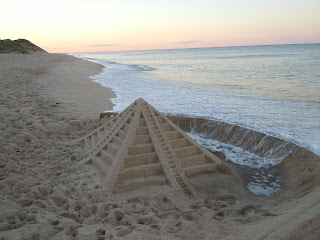 It is possible, if enough attention is paid, to disappear oneself, to become so trivial that the movements of the planet affirm their truer natures: the sun no longer appears to climb in the sky, but we tilt towards it, yearning towards sunset, swinging around until it seems certain we will drop off the bottom at night’s edge. But that is not what happens at sunset. Linda is in charge, and Linda finds for us a murmuration of starlings. Yes, she does. Hundreds of thousands of starlings bloop and roll in the sky just at sunset, roiling above an ocean of mercury and a pyramid of sand, and then, in seconds, they all drop to the earth and disappear. The ground before us is now invisibly feathered, and Linda has remembered the Proseco, too. What is she planning for the next day? 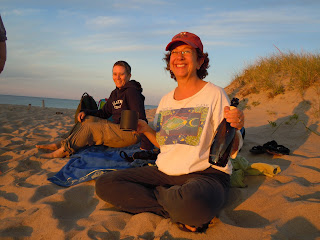 Not so much. Whales appear, but even through powerful binoculars they are just commas on the horizon. But soon enough, they are drawn to Linda and pull towards shore for an extended synchro performance, tails aloft and flippers slapping. I could not be peeled away for another forty-five minutes, but Linda is inquiring whether we might need to see Provincetown, just around the bend. Nothing about it seems likely to best the whales, starlings, dragonflies and hadrosaurs, and we are comfortable leaving it among the many things we may never see.

Nearby there is a monument to my forebears, who lurched over in the belly of a wooden tub called the Mayflower. After a two-month journey, they were urped ashore around here and, while no doubt relieved, were insufficiently delighted by the prospects and sailed on. They didn’t have Linda, though.