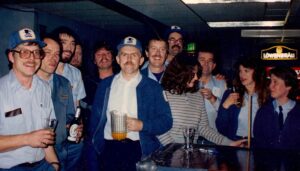 The Post Office is hiring! We got a post card about it in the mail. I remember trying to apply for a mailman job in 1976. I went to the post office the first day I was in town because I’d always thought it sounded like a fun job, and I didn’t have a job at the time. They weren’t hiring. They’d only open the employment window every few years and let in anyone who could pass a simple test involving being able to read, or (alternatively) someone who couldn’t read but had a buttload of veteran’s preference points. A year after I arrived the window opened again and I snuck in, after being scolded by the old lady doing the intake exam, who strongly believed I should leave the jobs to the men who had to provide for their families, and also told me I’d drop my uterus the first time I had to pick up a heavy sack. Well, I wasn’t using it anyway.

They had to work at it to come up with benefits of postal employment. “Competitive Pay” led the list, although they didn’t say who they were comparing themselves to. “Medical and Dental Coverage,” which is good, and might attract the odd light meth user. “Diverse Workplace.” This is also a good thing although a bit odd to list as your third benefit. We were diverse though. Looking back, I’d say some of our employees were diverse all by themselves.

Anyway the pitch sort of peters out after that.

“Sense of Service to the Community.”

One can almost feel the hesitation and pencil-tapping as the creators of the card strove for a fifth bullet point. Odd numbers are more aesthetically pleasing on a printed document. Ah!

Well then! I can take it from here:

“Sometimes there are donuts.” It’s true. Donuts showed up on the workroom floor with some regularity, whenever someone bid out of the station, or bid into the station, or some sort of random metric was magically achieved by the work force. Often the boss supplied donuts but at least as often one of us fatties brought them in ourselves just to curry favor with coworkers, which is important in an environment with more than the customary percentage of Disgruntled Postal Workers.

Which brings us to another bullet point.

“Your own metal sorting case.”

This is a multi-functional unit. There’s a desk to rest your coffee cup and donut, it’s closed on three sides so you can get away with picking your nose a lot of the time, and the area below the desk portion can be used as shelter in the event of earthquake or active shooter. That Safe Zone is rumored to exist in nature but under ordinary circumstances you will have already crammed all sorts of crap under there. Still. What else?

“Hardly ever any anthrax.”

Anytime someone encountered a suspicious-looking package, they were instructed to step away from it and contact one of the clerks trained in hazardous materials. Usually that meant Big Mary came over and flipped one of those plastic tubs over it until someone figured out what to do. Safety First is our motto! Which is why we came back in one afternoon to find four asbestos workers in full hazmat suits chipping away at our ceiling in a small area marked off by yellow caution tape, which we dutifully stood outside of, looking up, mouths agape.

Mouths agape was a default pose for a lot of us though.