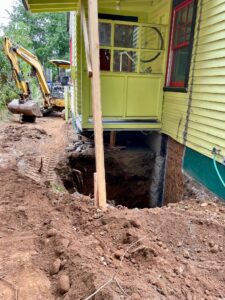 Or maybe I was the only one thinking that. I knew exactly what was going on whereas some of my neighbors might have thought we were finally being overrun by Tyrannosaurs in steel boots. We shouldn’t have put off packing that go-bag, they were thinking.

What was going on was a gruff and humorless older dude with a backhoe and a jackhammer was demolishing the concrete stairs leading into the basement next door. Theoretically, he plans to replace them.

We bought the place over twenty years ago with no intention of ever renting it out to a bunch of icky strangers. We were planning to stick my sister in it. But she never made it and so now here we are, landlords for God’s sake, nothing any reasonable person would aspire to. I’ve been a renter, and not one of the good ones. I know how they can be.

Anyway that has all worked out more spectacularly than anyone could have imagined, and over time we’ve made improvements. Sensible things. New kitchen. Thermal windows. Flooring. A nice fence.

Which leaves the basement. It was a perfectly good concrete basement. Not huge, but nice and cool. There’s plenty enough space to store stuff and the laundry room is down there too. But I have a great fondness for underground living space. In essence, I am a bald marmot. I wanted it spiffed. You’d have to be nuts to bother. But I think every house should have a basement because come the heat apocalypse when the grid collapses it will still be comfy. I’m drawn to low-tech energy solutions.

Ever heard of the Winchester House? The Widow Winchester was also nuts. She had boatloads of ill-gotten money from her late husband the gun-monger and she felt the need to build a house continuously so that the carpenters’ noise would scare off the ghosts of people killed by her husband’s rifles; in the process she introduced oddities and bafflements like stairs leading to nowhere, just to confuse any ghosts who did make it through. None of this was true but it does sell tickets and it is a mighty odd house. The stairs to the basement in our rental are every bit as odd and so we feel exactly like the Widow Winchester except for the money part. 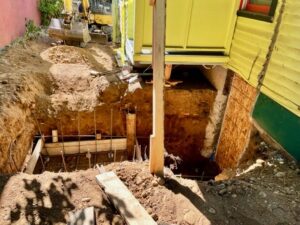 The basement stairs went all the way down to the door—with no landing—and you had to bend over to use the key. Once you open the door, you discover the final step is inside the room. Ha ha! I’m not sure if any ghosts are deterred but it sure could do a number on a drunk.

I’m trying to imagine the thought process here. Someone had to have formed up these stairs. Clem and Roscoe. They’ve dug out just about as much dirt as they ever cared to. “Looks about right, Clem. Whaddya think? Seven steps gonna do it?” Clem aims an upright thumb at the basement door and squints. “One, two, three…shoot, Roscoe, I reckon we can do it in six, and Bob’s yer uncle!” They form up the stairs and start pouring concrete until the bottom riser gloops right up against the door and then Roscoe is all “Uh-oh.” He opens the door and sees that he is still a foot higher than the floor.

Clem scratches his stubble. “Aw, we can make it work, Roscoe. We just pour one more step inside, and cut the bottom of that door off.”

Roscoe slapped his hat against his knee. “Dang it, Clem, you tiny shit, fine for you, but anyone over five foot three is going to have to bend in half just to get inside.”

“Naw.” Clem held his hand above his head. “The door will be a little short, but see, we can frame up the door-hole and just cut out a space in the ceiling here so there’s room for it to open up. You’d only have to duck a little.”

As it happens, this arrangement does not meet modern code.

What with one thing and another, nothing about this project makes financial sense. But I’ll tell you one thing about me and my marmot brethren and sistren. Come the apocalypse, we’ll be cool.