Standoff At The Canadian Border 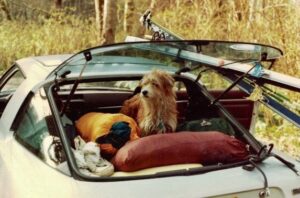 There’s a big bunch of burly toddlers up in Canada shutting everything down until they get their way. Well, they started out demanding the freedom to rent their bodies out to viruses, but they are emboldened enough now to demand candy for breakfast, the abolishment of bedtime, and the freedom to mess up Jews with impunity. It’s a pretty cool deal because now we know that a minority of people can decide how things should be for everybody as long as they have big scary trucks and guns and stuff. Most of us consider this no way to run a society but this distraction sure could’ve come in handy when Dave and I crossed the Canadian border into Montana back in 1981. We might have been waved right through.

Which is what happened on the way up to Canada to begin with. I don’t remember a thing about crossing that border. I think some guy in a little booth told us to have a good time, eh, and handed us some maple sugar and a map to the nearest Tim Hortons through the window. In any case, I didn’t think crossing the Canadian border would be any kind of big deal. That is because thinking was not my strong suit.

We did have a good time, eh. We camped out, we skied into gorgeous alpine lakes framed by soaring snow-covered mountains, our dog running just ahead of us and (once or twice) under us. Turns out you can press a small dog into the snow and ski right over it and it will pop back out good as new and twice as feisty.

That dog saved us more than once. 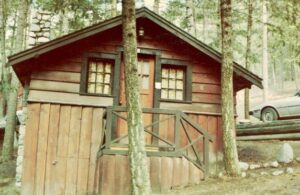 The night before we were to cross over into Montana we stayed at a rustic cabin in Radium Hot Springs and had a romantic evening with a roaring fireplace and fell asleep, and we’d still be asleep or something that looks a lot like it if it were not for Boomer barking her fool head off. We woke up just inches under an opaque pall of smoke and sprang up to open the doors and windows and pet the dog hard and repeatedly. Then it was on to the border, and Dog Rescue #2.

This time, on the American side, two humorless border guards asked us to get out of the car, and we did so, while they searched it.

With a German Shepherd.

I asked if there was a bathroom I could use and the guard said “You stay right there until we’re done,” and here’s a thing you should know about me: I could set off a lie detector in the next county. Even if I wasn’t plugged in, and even if I was innocent. In this case I wasn’t. I broke into a sweat. They checked the glove box, they checked under the seats, they pulled enough out of the hatch to access the spare tire. And finally they told us we were good to go. We drove off.

“Where did you hide the pot?” I asked Dave, with my remaining breath.

In the bottom of the dog food bag, he said. Oh my. The German Shepherd was all over that kibble, but the guards kept pulling him off. I was full of admiration for my man, but I’m not sure my mom would have seen it the same way.

But because of him we were able to dip down to Bozeman and visit that wonderful woman instead of having to call her from jail. Over the years I managed to keep my mother from knowing any of the dumb stuff I was up to and I’m proud of that. It was a lot of stuff.

That’s about all I could be proud of, but I’m proud of that.