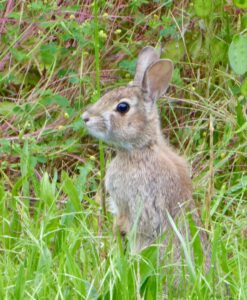 I had a couple ideas for blog posts just as I was getting into bed. I didn’t want to get up and write them down. So I just concentrated: Think chicken, I thought. Think rabbit. Chicken. Rabbit. Then I went to sleep.

It worked. The next morning I remembered! Chicken! Rabbit! I remembered what I wanted to write about chickens.

I have no idea what the rabbit is about.

I mean, I already know a bit about rabbits and a lot of that is stuff you’d just as soon not know about rabbits. Like how they eat their own poop. Sure, Labrador Retrievers hoover up cat turds and carpeting and stray socks and their own vomit, but we’re willing to ignore all that because they’re basically love factories with bad breath. But we’re against the practice on principle.

Technically speaking, rabbits do not eat their own poop, but a somewhat different item that just happens to come out of their butts, so. A proto-poop, as it were. We’re not trained to make the distinction, but they’re not at a loss about it. They have the same digestive conundrum that cows do: they eat a lot of cellulose and cellulose is hard for the body to break down. So the rabbits do the best they can with what they’ve eaten and then send it through a second time to get all the juice out of it. It’s not nearly as disgusting as it would be if a cow did the same thing. (That is not really a pie.) The cow just throws up in its mouth and continues chewing. All in all it puts a shine on our situation as primates. Most of us don’t eat poop unless we really want to. (Some apes are known to eat their own poop. Speculation is that they just get a hankering for warm food, which certainly underscores the significance of the human discovery of fire.)

At least rabbits don’t make as much noise eating as Labradors and they’re super cute.

They’re ridiculously cute. There have always been rabbits in the metropolitan area but we never saw one close by until last year, down the alley. It was very exciting. Over forty years in one spot and finally a bunny! 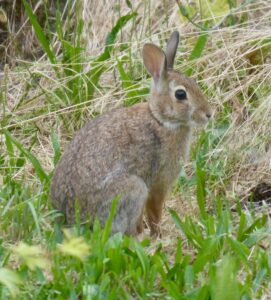 Then this year we saw a bunny in our very yard! All hippity hoppity around the corner of one of our raised beds and then suddenly it streaked back out again with the neighbor’s cat on its adorable tail. They don’t seem all that fast in the hoppity stage, but I’m here to tell you that cat had no chance. So that’s another thing about rabbits. They’re long in the legs, so if they’re just trying to amble, their rear ends get more air time than their front ends, which makes them hoppity. But if suitably motivated, they can shoot out like rubber bands.

I like our bunny. And then a friend told me: Fine, until it mows down all your lettuce, she said.

Oh. I see. It’s an interesting thing about physical beauty. Once you find out a beautiful person is an asshole, they get uglier. I’ve thought about that with our squirrels. I hate our squirrels. But if I saw one for the first time, say—if I was visiting from afar, I would think they were really cute and entertaining. I kind of miss the fact that I can’t enjoy my squirrels anymore. I see them as future consumers of my wiring and my car’s gas line and my foam seat cushions. I can see it in their formerly beautiful eyes. I can see it in the dastardly way they rub their paws together, thinking about chewing up some electricity.

So I’ve decided to enjoy the hell out of our bunny. Get all the juice out of it, as it were, here in this golden time, before it becomes a real shit. Oh wait. Two. We have two bunnies.

I still have no idea what I was planning to write about it, though.