Clayton For The Win 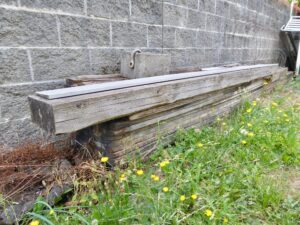 For years now, we’ve had a stack of sixteen-foot scaffolding planks and a massive beam against our garden wall. It’s where we stash things that look useful that we’ll never use. Every now and then one of us would make noises about getting rid of all that lumber but it always seemed like a big bother and besides it was just the right height to sit on while we were playing darts.

We don’t have a lawn. We do have this little leftover strip of grassy crap: it doesn’t get watered and it mostly doesn’t get mowed and by this time of year it’s just dried-up cowlicky yellow stuff. It looks like a satellite view of Boris Johnson. We position the chairs on the patio so we’re not looking at it, and call it good.

But now I have an idea for that spot and I really want that pile of lumber to go away. I went to the NextDoor site. That’s the neighborhood internet chat room where people whine all day long about icky homeless people and porch thieves and share security videos of shady characters, and generally if you spend much time there you conclude that Portland is going straight to hell and the police won’t come when you call because of all the libtards. Anyway I took a picture of our planks and said it was free for the hauling. “The topmost plank is sort of rotten, but most of it should be good,” I typed, because that is what I wanted to believe.

The first response was from a Clayton. “If no one takes your lumber, I can haul it away for a reasonable price,” he wrote.

But then the nicest young man came over, Jake he was, and texted me from his truck when he arrived, and put on a face mask as soon as he got out of his truck, and was generally sweet as pie like every Portland young’un I have had the pleasure to meet. I showed him the pile, he thanked me profusely, and I went inside, and then five minutes later he texted again. You know, from twenty feet away. And he was so sorry, but he wouldn’t be able to take my lumber. It was rotten clear to the ground. I went outside. “Not even good enough for landscape timbers, huh?” I asked, twisting my hands apologetically, and he said, “Um, I think—maybe?—you could use it for, I don’t know—mulch?”

You never know about these people. Was he some sketchy dude with a pickup, scoping my yard for metal to steal? Was he going to drop a muffler in my alley? Or a deuce? What was a “reasonable price” anyway? I asked him. He said, based on the photo, he could haul it to the dump for $40. $10 of that was for gas. That was damn unreasonable, and completely in my favor. “How soon can you get here?” I said. I mean, you can’t get a service person to pull his pants all the way up in the morning for $40. Clayton further noted that he can dump wood waste for free because he’s a veteran, so he wouldn’t charge me for that.

Because that would be wrong.

He texted when he was five minutes away. Ten minutes later, he texted “I think I’m here.” He wasn’t. Ten minutes after that he showed up. He’d been two blocks off. He had a map in his head; didn’t trust navigation apps. He was old-school.

Maybe not as old as I am, but maybe. He was also morbidly obese. He was wearing voluminous satin shorts over heavy black leggings and knee pads. And a baseball cap. I pointed at the pile of lumber and offered to help, at least with the beam. He wouldn’t hear of it. Then he pulled everything off and tipped it crumbling into his trailer. “Do you want me to take this?” he said, pointing at more crap behind our shed. Oh golly, no, that would be too much. “I’m already here,” he said. I thought about it and tossed one more thing into the pile.

Then another. Then some random pokey stuff, then stuff I’d forgotten we had, then the stuff on top of the two pallets I’d stored stuff on. Then the pallets themselves. Boris Johnson, the mayor of greater Crapsville, was cleaning up nice. I visualized neat, new expanses of gravel and meadow. Tidy storage and frolicking woodland critters. After two hours Clayton was a sweating, soiled mess and had no room left in his trailer and truck. “How much?” I said.

“I think I told you forty dollars,” he said, sweeping up the last of the rotten-plank mulch. Old-school.

Oh, he got all of that. And I got his phone number.