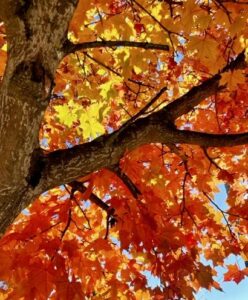 O. Henry wrote a number of tidy short stories before going into the candy business, including The Last Leaf, in which an ailing woman was convinced she would die when the last leaf of the vine outside her window fell. Which it didn’t, because her talented neighbor painted a beautiful leaf for her that was impervious to wind and death, although he was, himself, not.

Around here, about half of the leaves are down, and the rest are nervous. Deciduous trees are not passive victims of wind and weather. Their leaves do not merely dry up and blow away. The trees are giving them bright jackets with the company logo as parting gifts and punting their little leaf heinies out. The dwindling light causes the trees to muster a little line of attack cells around each leaf to forcibly nip them off, or at least get wobbly enough the wind finishes the deal.

They do this because leaves are basically a bother in the wintertime. They take upkeep, and they aren’t producing much in the way of photosynthesized energy, and if there’s a warm spell they might just decide to sign up for work again and get the sap running. Come the inevitable freeze, the tree is screwed. So the tree announces a restructuring and workforce imbalance correction, a right-sizing if you will, and chirpily invites the sacked staff to reapply in the springtime.

The little people, as ever, are not in charge. 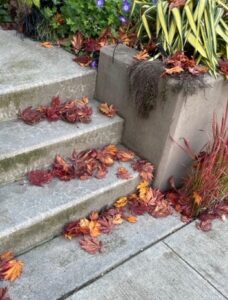 Anyway this whole painful separation is, of course, engineered by hormones, which are, scientifically speaking, little chemical assholes. In plants as well as in humans, they are responsible for all sorts of crap that you do not remember signing up for.

My own deciduous nature has been evident for some time. I can’t remember observing the transitions, but my arms are now nearly bare, when they used to have a bright enthusiastic fuzz to them. My legs look like a legal clearcut with one standing tree per acre. My eyebrows went underground and popped up like prairie dogs on my chin. Even my pubic hair is mostly AWOL. I don’t mind that. I wasn’t using it for anything. My pubic hair never was that big a deal compared to most women. I have known women who needed to part their thatch with barrettes just to get anything done.

Why do we lose hair as we age?

“Getting older is one of the most common causes of hair loss,” according to a prominent internet dermatologist, who added that the primary cause of poverty was lack of money.

For whatever reason (HORMONES), as we get older our follicles get smaller; that energetic button of a follicle sags into an apathetic packet of lint with no ambition. I can tell: I used to have to yank hair strands to pull them out, and now they’ll take flight if I look at them crossly. 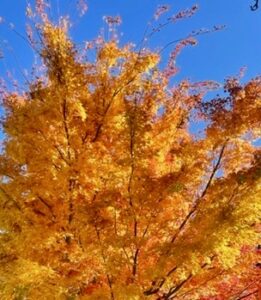 It’s only recently, however, that I’ve noticed significant thinning of the hair on my head. I now spend minutes a day plucking hairs off my clothing and occasionally have to go spelunking in my bra for annoying strays. My temples are so sparse now that my former glorious hair curtain looks like a sheer, in front.

There’s nothing to be done about it, or if there is, it can wait until we’ve solved world hunger. But a few weeks ago I discovered an exciting new recruit. It was in the course of my daily ablutions that I noticed what I thought to be another fallen soldier, caught up in a crevice and awaiting proper retrieval and burial. But no. It was attached. I have One Pubic Hair that is three times as long as all the rest. I’m very excited. I have carefully coaxed it to its full length and am considering marking my thigh with a Sharpie so I can track its progress, the way you mark your child’s height on the door frame. I cherish it.

It’s the Last Leaf. I don’t want to know what happens when it’s gone.