Don’t lend me anything you care about

Anna, our renter, is very mature. I’m overripe but that is not the same thing. She knows this about me already.

“Do you happen to have any extra furnace filters?” she asked me once. “I’ll pick some up later, but I’m overdue for changing the filter on the furnace.”

“Furnace filters?” I asked, after a pause for my neurons to line up.

“How often do you change the filter?”

You can actually hear the pushing and shoving when my neurons are trying to line up. They’re worse than first graders.

I have not changed a filter on my furnace since it was installed. In 1996. We did bring someone in to ream the whole system and try to vacuum out the dead mouse in the ducts. That was a few years ago.

So Anna shouldn’t be surprised at anything about me at this point. She just came over to use the washing machine because her washing machine is in the basement and there’s currently a big hole where the stairs used to be. She hauled her basket in and all appeared to be going well. Then a noise came out of the laundry room. Let’s call it muted disgruntlement. Everything okay in there?

“Well,” she said, “you have peanut growing in the washer.”

I’m used to finding peanuts in our washer drum. I have pockets full of them for our crow buddies and don’t always remember to take them out. Wait. Growing?

By this time Anna had her hand so far up in the rubber gasket of our washing machine that she could have been turning a breech calf around. She pulled out one sprouted peanut plant, several unidentifiable items, and a damp rodent. “I thought my clothes smelled a little ‘off’ the last time I used your machine,” she said. “So I had a look around.” 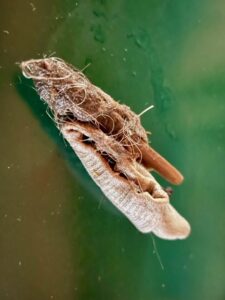 Well, I thought my clothes had been smelling a little off myself, but that’s what In-Wash Scent Boosters are for. It never occurred to me that there was anything to be done about it. Nor did I have any idea that the rubber gasket around the drum was something you could stick your hand in. I thought it was totally attached. But the aforementioned crap did come out of it. It wasn’t actually a dead rodent, as it turns out. I think it is a portion of an old sock with a bunch of hair stuck to it. The peanut is totally a thing though.

So I googled all this. Why, you’re supposed to clean out various parts of your washer once a month, as it turns out. Wipe it down. Send a vinegar rinse through it. I went in to do just that. Later I read the beginning portion of the instructions, where it says “If your washer does not have a cleaning cycle, you can do a vinegar wash…”

Huh. Lookit that. There is a cleaning cycle on my washing machine. I should try that out sometime. I kept reading. How long is an HE front-loader supposed to last? 10-11 years, according to the internet, and that’s if you maintain it. Our washer is 26 years old.

Anna’s father Tom has a lot to do with how much basic life stuff she knows and how responsible she is. I wondered, idly, why I hadn’t learned anything about this sort of maintenance when I was growing up, but those were simpler times. We just had the rock, and the river, and the wringer.

“Have you ever met anyone less mature than I am?” I asked Anna, abashed.

“Sure! Definitely,” she said.

“That you weren’t in a relationship with, I mean?”

The trouble is, I don’t know what I don’t know. In the meantime, I’m going to see if Anna needs to borrow the dishwasher, the refrigerator, the oven, a cup of electricity, or any of an assortment of power tools. I’m generous that way.