Getting A Little Woody 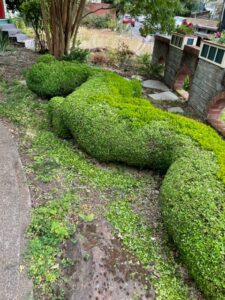 I don’t know if length is more important than girth. It’s a matter of opinion. But it’s something I need to think about because somebody is about to get a little trim.

In this case, we’re mostly worried about girth. There’s such a thing as being too thick. That’s my opinion. And this whole issue comes up every year because the sucker keeps getting a little woody.

Presumably once my boxwood salamander had its fundamental shape under control it should have been a matter of just maintaining him, but as most of us know that gets harder and harder as the years go on. Once a svelte eft of sorts, my salamander has matured into a real fatty. This is concerning. Just this year I offed my frog when she got too fat to be recognizable. Now, I have seen fat frogs before. In fact, if you’re in the business of ferrying frogs across a highway to their mandatory nuptial zone in a swamp, you’ve hefted quite a few plumpsters. The cool thing about those large, wide females, at least from a human point of view, is that you dump them in the swamp, a bunch of skinny little males clamber over each other to get to her, someone squeezes out her eggs, and she hops back uphill like a kid, except with stretch-marks.

Settle down, millennials, I am not fat-shaming my shrubbery. It’s just that once your frog’s front leg starts to disappear into its belly like Mitch McConnell’s chin into his neck, you no longer know what you’re dealing with. People are liable to point at it and say “What is that? A pastry?” 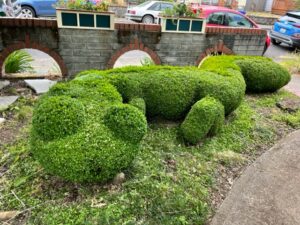 So my salamander has gone from a slender Plethodon to a big-headed Ambystoma to some sort of snot otter and at this point I’m just trying to keep him out of manatee territory.

My salamander gets a little trim only once a year. In the intervening months, he puts on a little wood. I don’t know if you can clip him all the way back to the wood without discouraging him altogether. I don’t want to find out, either. But any more weight around the middle and he’s going to look like a horny-toad and that’s not even an amphibian. And it feels too much like major surgery to really come at it hard. You don’t want to end up in a Michael-Jackson’s-nose situation. Dig too deep, eventually you don’t even have anything to work with.

My botanical buddy is still beautiful, but I’m afraid at some point he is going to be dragging his belly and his little legs are going to be sticking out sideways. And then there’ll be nothing to do but plant four more legs, resculpt the nose, and make a tardigrade out of him.

Although I don’t have any confidence that people would pick up on a tardigrade. Already 90% of passersby stick my salamander in the “hedge” category and overlook him completely. Apparently we’re all so self-absorbed we need our topiary to have four sizeable legs, a neck, and horns before we’ll deign to recognize it. Or have it sitting up on its mammalian haunches, like a squirrel. I’d love to be able to pull that off with boxwood, but I’m afraid only yew can make this squirrel seem right.