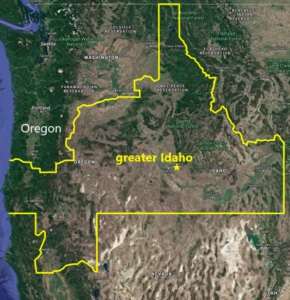 Comes down to it, you have to take your blessings as they come, and so after another national election we can finally sit back and say “Well? We’re slightly less screwed now.”

We’re still screwed. A lot more people are inclined to “believe in” global warming now than used to, not that global warming cares. But many of them are not entirely up to snuff on the details. There’s a general consensus that the weather is getting grumbly. Still, the average American is probably thinking along the lines of “three degrees warmer? I could live with three degrees warmer,” as though, worldwide, we will all be fine if we unbutton our cardigans. Sure, some of those coastal areas are getting smacked pretty good, and the west coast is basically on fire, but if we just drive our SUVs inland a bit, we’ll be okay.

Say, to the good ol’ heartland. Where the good ol’ Heartland Institute chirps that there is no existential threat involved with climate change! None! Because, you see, historically, more people have died of being too cold than of being too hot. Also, they point out saliently, Ted Kaczyinski, the Unabomber, still believes in global warming. Clearly, we’ll be fine.

That’s not really the way it works, though. Ocean warming has changed the currents. Sea ice supports algae in the Arctic and krill in the Antarctic and we’re yanking the loose threads on the food chain. The Gulf Stream, which is responsible for climate conditions in Europe, is slowing down ominously and is likely to drastically affect rainfall and temperatures. Some areas will be inundated and others parched. People will be on the move—in the billions. Our current global average temperature would not be 59 degrees but 122 degrees if the oceans hadn’t absorbed most of the warming so far, but even the ocean has its limits, and is approaching them. Infectious disease is on the rise. And we ignore all this to protect the profit from a dwindling energy source that we must transition from eventually anyway. We know what we must do and we know how to go about it but we lack political will.

So anyway, it could have been a lot worse in our election. We could have gotten a lot more power in the hands of people who were dropped on their heads as children—such as your Taylor Greenes, your Boeberts, your Gaetzes—or even added another Louie Gohmert, who was reportedly not dropped on his head so much as spiked like a football.

As it is, there has been a change in attitude among Republicans in the last few years, with a significantly larger percentage agreeing that climate warming (a) exists and (b) is caused by human activity, and they plan to address it by boosting fossil fuel production and increasing handouts to the petroleum industries. This will ease the pressure on Americans’ wallets, they say, which will be increasingly important after they ditch Social Security and Medicare.

All in all, we’d be better off with fewer Republicans, which we didn’t quite achieve this time around, but there are points of light. Beams of hope. Places in which the states, as the nation’s vaunted laboratories of ideas, can innovate to our benefit.

Idaho, for instance, is taking these existential threats seriously, and has not only instituted mandatory birthing because you just can’t have enough Idahoans, but has taken aim at the Drag Queen Story Reading cartels. Big Drag Queen has been in charge of the nation’s youth for far too long. It’s hard to predict what percentage of our fetal population will be good Aryans and what will be drag queens, but they’re willing to take their chances.

Citizens in at least eleven counties in Oregon have been so enthralled by Idaho’s no-nonsense attitude toward bogeymen that they have voted to redraw the border for a new Greater Idaho, with them inside it.

So I guess you all will have to continue to contend with the spread of hurricanes and wildfire and tornadoes and drought and mosquitoes. Here in Oregon, we have to fight the spread of Idaho.