I Can’t Hear You Over My Porch 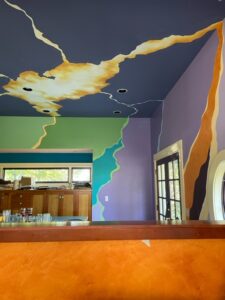 Most of the paint choices in and on our house have been made by Dave over the years. That is why our house is, in general, tasteful. I did choose paint for two rooms in our house and one of them has about sixteen colors in it and the other is faux-painted like orange leather. And I did choose the colors for the rental house, because it was going to be my project. I had some nice colors picked out that I saw on an attractive house in the neighborhood, but at the last minute I thought: No! Let’s have fun with this! And so the house is now lime green, black, red, dark green, turquoise, and purple. The lime green (in my defense, the name of it was “Always Lime”) almost immediately faded to Highlighter Yellow. So far, about the nicest thing anyone has said about it is “Wow, you’re really not afraid of color, are you?”

Yes, Murr, you should. I think it’s nice that Dave doesn’t intervene in my choices, but things might look better around here if he did. He did make one mistake once, painting the interior of our cabin a color he thought was going to be sort of terra-cotta, but turned out to be Baskin-Robbins pink. Maybe that’s why he’s been reluctant to weigh in on my ideas.

Anyway we’ve been trying to save our house from turning into mulch. We get a lot of rain here and although the parts of the house that were built in 1906 still look sound, the newer portions are rotting away. We have fungal developments shaped like windowsills that are about to collapse into powdered crud. It’s a worry. The reason that we’re having all these problems, I am given to understand, is that they don’t make lumber like they used to. Which is good, since they used to make lumber by taking down old-growth giants and milling the best parts and chipping up the rest so the lumberjacks have something to chaw on. 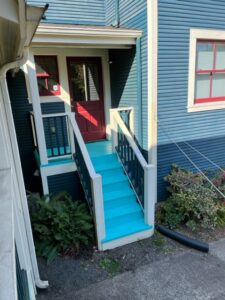 Still. My house is getting unacceptably squishy. I’ve got my eye on the porches now. The bottom tread on the stairs of one of them was replaced last year when it started to go doughy. It had to be painted, and the whole house isn’t due for that for another few years. The other steps were looking a little worn too. Hey! thought I. Why not repaint the porches a different color? The house is a very deep teal-green with creamy trim and red windows. What if we introduced a complementary hue? Maybe something halfway up the paint chip from the deep green? I got out my paint chip fan. There are five hundred thousand colors in it.

None of them was exactly right.

I wanted something that had a hint of blue to it. A cool green, or a warm blue, somewhat toned down, but not so much as to disappear. This magical color did not exist.

I whacked it down to eight choices in the general range and went back and forth on my decision for days. Until it finally, inevitably, tipped into the zone of my temperament that loathes indecision, and also choices. “Just pick something,” a wise friend once told me, “and get used to it.” After all, I thought, if I don’t like it, I can change it when we get the whole house painted. 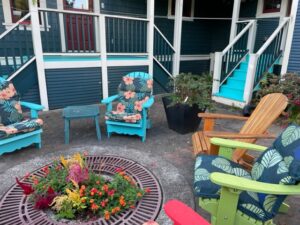 I sat out on the patio and fanned the chips out toward the house and squinted. We have a pair of turquoise Adirondack chairs which, like all my Polywood chairs, are rather loud. They recycle milk jugs to make these chairs and I love them a lot, but they only come in Bright. I didn’t want anything with quite that much sass on the porch. I wanted something in that green-blue range, except more subdued, tasteful. But—thought I—it should have a little pop to it.

Well, it popped. It would pop on a drag queen. It would pop at dead midnight during a new moon. Mardi Gras beads would disappear on it. It is, in fact, exactly the same as our turquoise chairs. Last thing I remember, I heard a voice in my head that said “Fuck it. Go big or go home!” But this is my home. What the hell happened?

I’ll tell you what happened. I dithered and dithered until finally it was getting on in the evening, and ditherment was starting to piss me off, and I just wanted to make a choice and be done with it, and shadows had lengthened, and the paint chips were in lower light.

Also? I was on my third beer.