In God We Trust (The Assault Rifle Is Just For Backup) 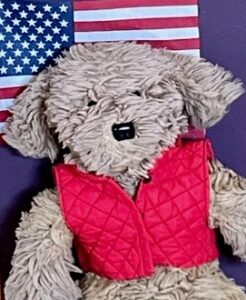 Well, bless their spiritually fragile hearts, the Pharisees of the Texas legislature have mandated that posters of our nation’s motto, ”In God We Trust,” be hung in elementary and secondary schools. Unlike in Mississippi, they are not forcing taxpayers to pay for such displays; the rule applies only to donated posters. Fortunately for the souls of Texas chilluns, there is no end of people eager to donate. No child of Texas shall be confused about whether to trust the man in the car offering her candy now, unless he looks like God.

According to its proponents, this will be a beautiful affirmation of our nation’s collective devotion to a sovereign God. Well, you know. Most of our nation anyway. The good parts. And it allows God back in our schools. I say if God can get past the armed guards and locked doors, He really doesn’t require any more signage. He’s got things covered, and while he’s in there, maybe he can stick his big Finger in the barrel of the odd assault rifle now and then.

It’s an interesting fact that the use of “In God We Trust” has passed legal muster time and again against those who believe it crosses the line that is supposed to separate church and state. The legal justification boils down to “By now, everyone knows nobody means anything by it.” Why bother then? Well. You know. God.

The Texas version is called the “In God We Trust Act,” and an act it surely is. Like it or no, it’s our official national motto now. A lot of the fans of this legislation would, in other contexts and for other purposes, call themselves Originalists, and huff and puff about the Framers’ intent, but the Framers had nothing to do with this. There’s nothing Original about this motto. It’s not even as old as I am.

It was dreamed up and brandished in front of the world in 1956 and basically it meant “At Least We’re Not Commies.” It’s serving the same purpose today, but without the Commies. You can fill in your own villains and there is a plentiful supply on tap—entire think tanks are devoted to fabricating them. People who suggest that Black lives matter? Terrorists. Gays? Predators. Radical Socialists and Liberals? Hey, that’s us! We won’t even get into the atheists, the agnostics, or even the Christians who prefer to pray to their god in private, as instructed in Matthew 6:6. We can dismiss all those people, because we’ve already stated that our nation has a collective devotion to God, so anyone falling out of line is not a real American.

This sort of strutting is happening all over. It’s the opening crusade of Project Blitz, an effort by the Christian Right to ensure that God is not only All-Knowing and All-Seeing, but All Over. The goal is to codify us as a Christian nation, and not the sissy Jesus kind, either. Several states already mandate religious spectacles and require Bible lessons in public schools. Virginia is slapping In God We Trust decals on their state vehicles. I guess the seat belts can go, too. Boxes of American-flag pull-ups are on their way to South Dakota preschools. Ultimately we will achieve that ideal State, wherein queers, immigrants, intellectuals, scientists, insubordinate females, and other undesirables can finally be done away with. The template is on clear display in Iran, Afghanistan, Saudi Arabia, but don’t worry—our version will be pure because our God kicks ass.

The interesting thing about “In God We Trust” is the motto it replaced. E pluribus unum: Out of many, one. That our strength as a nation is derived not from a sovereign, human or divine, but from the power of our diversity, as we come together to provide for the common good. That as much as we cherish our independence and our civil rights and freedoms, we are even stronger for banding together.

Well, that had to go. We are not about to start down that road to socialism that might result in such affronts to personal liberty as fire departments, public transit, roads, schools, security, and a better life for all. We’re not about to shell out for any of that. We’ll take our chances; we put our trust in God.

United we stand. Divided we sell the farm to pay for our cancer treatment.