No way to run a city

Got my ballot, got my Voter’s Pamphlet, got dots to fill. The races are pretty easy. Straight Democrat all the way. It’s not a thoughtful policy in normal times, but ever since the Republican Party hung out their “You must be this vile to run as a Republican” sign, it’s been an easy call. If the Democratic Party runs a shingles virus for State Legislator, they get my vote.

The ballot measure that’s catching my eye is the one where we redesign the form of our city government. Currently Portland is run by four commissioners and a so-called “weak mayor” who has exactly as much power as the commissioners and doesn’t get to decide much. The mayor does decide bureau assignments for the commissioners, usually in a fairly random manner, although historically the mayors grab the police bureau for themselves. If the mayor is ticked off at a commissioner, they are likely to snatch back Parks and Recreation and give the commissioner the Bureau of Where The Poop Goes.

This system is the last of its kind anywhere in North America except, apparently, Toronto, where they were somewhat better off having a weak mayor in the Rob Ford era. Our system was put in place in 1913, which is the same year my mommy was put in place, but she was abolished in 1981, and this system lives on. Everyone agrees it’s a stupid way to run a city, and this is the first time anyone has tried to do anything about it. 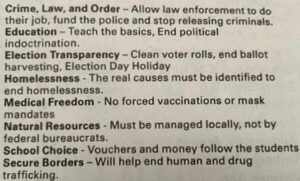 I wouldn’t even have to study the issue if the usual method applied, which is to read the arguments in favor and in opposition and note who brings up irrelevancies like fetal supremacy and the sacred right to strut around with a personal arsenal unavailable to Ukrainians. However, this time nothing was clear. The people and organizations lined up pro and con are all wonderful. The Time Is Now! say supporters, but turn the page and you discover Now Is Not The Time, after all. It’s a conundrum.

One very good idea is creating a City Manager to run all the bureaus. That way commissioners can draw the broad strokes while not having to abruptly get up to speed on Poop Particulars because they ticked off the mayor again.

Since currently commissioners could conceivably all live in the same tony block in the West Hills and yet represent the whole city, the new proposal aims to spread the blame out a little better by creating four new districts and allowing their residents to vote for three councilors each. The idea is no matter where you live, you get to vote for someone who will have your area’s interest at heart. Twelve councilors is a lot of councilors. Any more, and it seems like you’ll have people running on the platform of getting that abandoned Trans-Am off the corner of 143rd and Whatsit Street facing off against the dude who’ll get Velveeta back on the shelves at the Shop & Drop. I don’t know.

A better plan would be to create, say, eight districts with one representative for each. But that’s not on the ballot, and proponents of the current initiative say it’s better to jump on this bandwagon and tweak the thing later.