Now For The Cattle 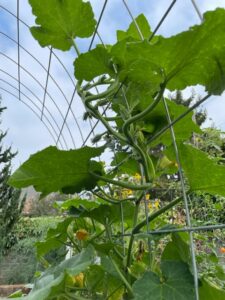 It was a simple enough idea. Buy a long piece of galvanized hog-wire fencing and bend it into an arch between vegetable beds; train squash plants on it. It will get the squashes off the ground and look super cool too. Vertical gardening is an excellent use of available space even for those of us without a lot of verticality. I assume I will be able to reach any vegetables on the arch, but if not, I do live with a reacher-person, a navigator of tall shelves. I call him my Extend-A-Dave.

I was all set. I you-tubed the straightforward method of achieving an arch. The only hangup was the matter of getting a sixteen-foot length of stout fencing home.

My friend Margo said I could use her truck. But in the middle of the night I visualized getting it scratched up. Or plowing it into something scrapey. I dithered. Then it occurred to me: our old Ford 150 is still around the corner. It can’t get any scratcheder. I gave it to our neighbor Steve for free in exchange for being able to use it once or twice a year. It’s been three years and I’ve borrowed it once. I felt like I still had some credit on my account.

The Ford is 36 years old but it never once aspired to the gravitas of our ‘69 Cornbinder. “Gravitas” is from the Latin for “one more ton of gravel than you have any business driving home.” That was one giant lead-bellied armadillo of a truck.

Anyway, Steve said sure, I could take the Ford. He’d replaced the starter and it works pretty good most of the time now. Sure enough, it started, reluctantly, but then drove like a champ once it got going. Which is good, because the one time I did borrow it, it stranded me cold in the bowels of the city dump and ten underpaid laborers had to push it uphill to get it out of their way. 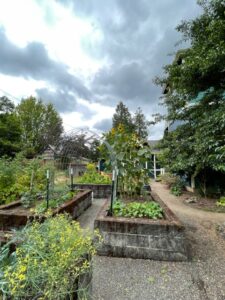 The PTSD from that incident kicked in pretty strong but after about fifteen miles during which nothing awful happened I began to ease up my grip on the steering wheel. It was a ways out to the farm store that I’d called the week before, when they said they have “lots” of these so-called 16-foot cattle panels. Which I imagine they did, then. On this day, they had none.

So I’d used up all of my gumption and trepidation and done nothing but run through twenty bucks of gas.

Maybe next year, I said to myself, defeated. But the next morning I called around and found another farm store that claimed to have cattle panels right now. I drove all the way out and they totally did.

These stores are marvelous. I wanted to walk through every aisle. There had to be gobs of things I didn’t know I needed in there. Straw, tools, bondage supplies. The little girl at the checkout counter was knowledgable. “I’d like to get a cattle panel,” I told her, fairly chuffed about knowing the terminology, “and four T…four T…four T-thingies.”

“T-posts?” she said, smiling. She is used to people coming up to the counter and saying “I’ll take twenty cattle panels, eighty T-posts, a box of connectors and wire clips, a castrating plier, fifty pounds of beet pulp pellets, a kid puller, and, oh, throw in a bag of them insemination sheaths—unslit,” and she’s got it all totted up pronto. “Will there be anything else?” she said, still smiling.

I looked around the store longingly. She knew I didn’t have anything in mind but my thought balloon was saying “maybe a box of tiny chickies?” 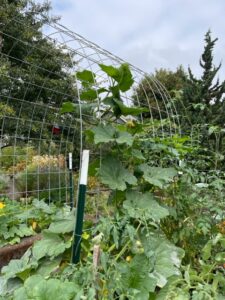 I pulled the truck around to the spot where they promised someone else would load up the panel. Someone did. “Should it be tied in?” I asked. “Probably a good idea,” the young man said. “You got anything to tie with?”

I do. “I’m not good with knots, though,” I said, working the old-lady angle as hard as I could.

“Basic square knot should do ya,” he said, slapping the side of the truck and walking away.