The Storm is Coming 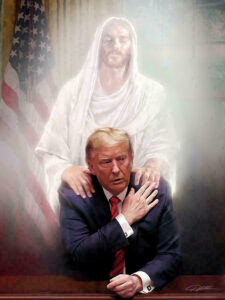 Speculation is rampant in the wake of the recent abrupt disappearance of Donald J. Trump. What is not in dispute is that Mar-a-lago has vanished in its entirety due to a small, vicious tornado spawned from Hurricane Ian that touched down with pinpoint precision. Nothing is left of the mansion although surrounding property remains unscathed, and pages of top-secret documents continue to spin out of the sky like God’s own snow.

The threat of tornadoes in Palm Beach County had been well publicized and Mr. Trump himself was reported to have hunkered down in his office with a map and a Sharpie to see if there was something he could do about it. “He was definitely in there,” according to the club’s golf pro. “He always goes inside when the wind picks up like that.”

Liberals across the country were highly amused by the event, freely demonstrating the blackness of their Satanic hearts. Many appeared to ascribe the surgical strike to an act of God in retribution for faked “sins of Trump” in particular and Florida Republicans in general. Others quipped that the former President would have been better off seeking refuge in Stormy Daniels.

Trump supporters countered that liberals are demonstrating once again that they have no idea how God works, which is to say, in mysterious ways. The Mar-a-lago tornado, they say, is too on-the-nose to be the work of a mysterious God, who would never show His hand that bluntly unless He was throwing a thunderbolt at an abortion clinic or a mosque, and even then He prefers to exercise His will using a human hero with a holy pipe bomb.

Joe Biden was widely blamed for the entire weather fiasco that engulfed Florida, a state for which he and his Liberal cohort have shown so much contempt. His prompt use of FEMA funds was seen as a deliberate provocation designed to contrast favorably to Trump’s less robust efforts in Puerto Rico. “He definitely did it,” said one damp Broward citizen. “He’s got the National Oceanic and Atmospheric Administration and the Corps of Engineers in his pocket. How else do you explain how he sent emergency federal aid to Florida before the hurricane even hit the state?” she said, tapping her head. “Think about it!” 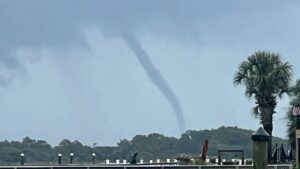 Furthermore, she went on, Biden is responsible for high gas prices just when he knew Floridians would need to fill their tanks in advance of the storm. Trump himself, whose closest aides say was an expert on hurricane gas, had already pointed his finger at the illegitimate sitting president who, he said, only wants Americans to suffer.

Others sharply disagreed that Biden held any responsibility for anything, inasmuch as he died in 2019 and currently exists only in computer-generated imagery to continue to do the bidding of the Deep State. Democrats, they say, in a suspicious display of unanimity, are tripping over their hemp loafers to assign blame for the catastrophic weather event to fossil-fuel-generated climate change—all part of a plot to usher in socialism and take away our freedoms because, in their blackened hearts, they don’t believe Americans should have any fun.

In fact, say some, Ian itself is a crisis-actor storm created with special effects and clever editing and unleashed on media outlets worldwide. People are gullible, they point out. If they can believe Joe Biden actually got more votes than Trump when no one knows anyone who actually voted for him, they will believe anything. Even the so-called “storm surge” in western Florida was linked to climate change. Meanwhile, across the Gulf at Brownsville, Texas, caravans of immigrant rapists waded into the Gulf to bypass the Wall, but satellite footage clearly showing their effect on water levels was suppressed.

Nonsense, say others. Video and personal anecdotes clearly indicate the hurricane was real, but this was not an unexpected feat of engineering, for an evil regime in possession of Jewish space lasers. And whereas hurricanes, floods, tornadoes, and wildfires are indeed normally sent by God in retribution for a wayward country’s embrace of abortionists, hermaphrodites, and pronoun pirates, their appearance in a righteous state like Florida should come as no surprise to the faithful. As everyone knows, you can’t have the Rapture without first having seven years of tribulation and the appearance, on January 20, 2021, of the Antichrist.

But a place for the faithful is being prepared by the Lord, who has taken his servant Donald up to heaven in a whirlwind, totally like Elijah, where he now sits at His right hand, because he is the second coming of Jesus Christ. Nonsense, others say. He’s just giving Mr. Christ a chance to get up and walk around a little, maybe take a little golf break.

Either way. We are blessed. Praise the Lord!