The Unbearable Jellyness of Being 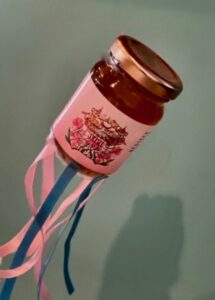 I got to thinking about jellyfish the other day, as one does. I like to think I’m broad-minded about a lot of things but I do like some boniness to my critters, even if it’s crusty stuff on the outside. Gelatin as a lifestyle is completely beyond the pale. There should be limits. My personal limits are at the shoreline. There’s some weird stuff out there.

Now, I do admire a good octopus. But your octopus has intention. Your octopus has skin and crazy muscle and the muscle goes every which way so it can stretch and compress and twist, and your octopus can personally self-dwindle into a little hole when it wants to. We can’t do that because of all the bones. (Cats can do it to some extent because their bones are secondary to their primary pudding.)

It’s hard to say what jellyfish have. They’re mostly jellyfish-shaped holes in the ocean. They can range from the size (and consistency) of a booger to the largest around 440 pounds, although most of that is water weight. They have three layers to them, with fancy names, but the upshot is they’re the outer layer, the inner layer, and the jelly in the middle. They don’t have bones or blood or much of an intellect, but they’ve been bombing around for a half a billion years. Which means at least they eat and reproduce.

The reproduction bit starts out sounding promising. Underneath the bell is a dangly bit hanging down from the center, and sometimes it has “oral arms.” So far, so good. Things go south in a hurry. The mouth is at the end of the dangly thing. And it also functions as the anus. Sign me up!

And then some kinds of jellyfish stash their eggs in pits on their oral arms. That’s right: jellyfish have oral armpits. Now you know.

So, this is what I kept thinking about jellyfish. Specifically, how do we know they’ve been around for a half billion years? What is there to fossilize? Turns out a jellyfish fossil is just a place where a jellyfish has been. A jelly stranded on mud, covered with mud, in the right conditions, can leave an impression somehow recognizable to experts. It would look like a rock that had a jellyfish thought balloon. (This is a good time to remind everyone that people who can read the minds of sedimentary rocks are far more interesting and trustworthy than most people in the public sphere.)