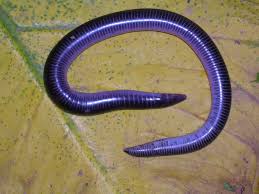 If a caecilian blorts in a burrow and there’s nobody underground to hear it, does it make a sound?

Such is the arrogance and heedlessness of humans that the answer has, heretofore, been “No.” We tend to be pretty quick to jump to a conclusion and then hold onto it for dear life, especially if it puts us in a superior light. A number of critters assumed to be mute have recently been recorded clicking and squeaking and lip-smacking and blorting away. Others have been revealed to have remarkable patterning and coloration in wavelengths we can’t register, and yet we’re the ones who think they’re dull. We’re like the Americans who assume people with accents are stupid because they speak five languages we don’t understand.

As a species, we be insular.

Heck, most people don’t even know caecilians exist, let alone blort, because of that whole underground thing. Not me, though. I wrote a report about amphibians when I was eight and the caecilians were right in there, correctly spelled, too.

Sometimes things we learn don’t even stay learned. This news about the unmuted critters has been making the rounds for a few weeks now, but a couple fellows refuted the common wisdom about caecilians in a paper 45 years ago. As they put it, “The problem seems to be that the fainter sounds are heard by relatively few humans, most of whom do not write scientific papers.”

They went on to report on having heard a caecilian. “The animal was picked out of a shipment of snakes…A soft yelp, squawk, or squeak [was] irregularly produced…when the animal appeared to be startled, as when it was handled, or dropped into a cage.”

Or, I would think, into a box of snakes.

Science might take a step backward from time to time, but mostly lurches on, and so it is that some very smart people have now taken the recordings of caecilians (and turtles and lungfish and other planetary residents previously presumed to be voiceless), and jammed them all up with “phylogenetic trait reconstruction models” for heaven’s sake and determined that all of us noise-producing vertebrates had a common ancestor 407 million years ago. I don’t know exactly how they did it, but they cinched it with a fossil recording of an early ostracoderm whining about all the goddamn trilobites.

Anyway I didn’t actually know much about caecilians when I was eight. They were sort of a footnote. So I was very pleased to learn that at least some caecilian mothers personally feed their young with something they secrete from their buttular region. And every so often the kids clamber all over her in a feeding frenzy and eat her skin off with their teeny tiny teeth. She grows it all back in three days and I’m thinking it probably feels pretty good getting exfoliated. The kids increase in size quite rapidly on a diet of butt juice and mom skin, emitting nom-nom noises all the while. Then they’re ready to go about their business like responsible adults.

And not some big-headed wobbler that takes 25 years to grow up, only to believe in lizard people.