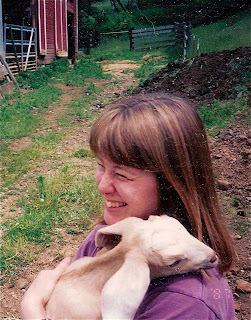 Our friends Scott and Kevin have a new animal again. It’s been one after another since we met them, almost thirty years ago, and most of them–not to say all–have never been served to us for dinner. At first, when they lived in the city, they maintained a modest cat collection and a German Shepherd. Then they brought home a box of quail chicks and the fun began.

The only rule, see, at Scott and Kevin’s house is that all the critters have to get along. Kevin believes that all creatures should live in harmony, although her cat Squeeker, before being re-educated, thought that maybe one of the chicks could live in Squeeker. Then they got a horse, and it was clearly time to get out of town. Scott and Kevin moved to the country and began pouring a slab for the Ark.
Not really. It was already there. You could see the direction they were heading when the sellers of the house they bought actually left their own dog behind. Three more showed up eventually. Cats materialized in the yard like puffballs after a rain. Goats happened. Pigs occurred. Most of the animals that lucked onto the farm were castoffs with a sob story of some sort, although the chickens were hired help. The rooster that came with the chickens fell out of favor the day he objected to Kevin bending over to collect eggs. He was well-spurred, bad-tempered and delicious paired with a nice pinot gris. 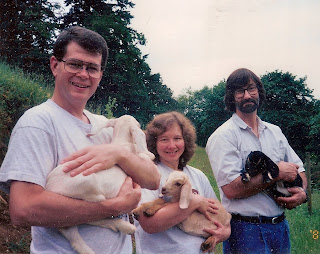 Other than the rooster, everyone seemed to get with the getting-along program. But Dave and I are city folk and tend to be a little leery. Take Einstein the sheep, for instance; he looked fine on the front end, but harbored enough maggots in the damper regions to send veterinary students peeling out of the school parking lot and home to Mommy. The goats were mannerly, as were the pigs most of the time, but Dave is unlikely ever again to sign up for pig-catching when it’s vaccination time. Looking back, we should have been tipped off when Scott provided us with ear protection. Myself, I was amazed at just how far a two-hundred pound man can slide on his belly, and how high a wake of pig poop he can kick up. The whole vision continues to be a day-brightener. 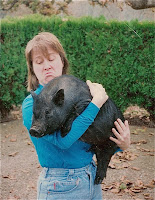 The emus were something else again. They had heads just big enough to mount eyes and a very pointy beak on, with no room left over for a brain. Dave engaged them in a stare-down, until they decided to get a quick look–a very, very, very, really amazingly quick look–at his crotch. To this day, Dave maintains a personal space just a bit longer than an emu’s neck. 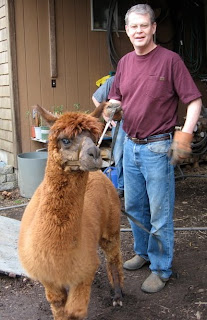 So now there’s Chester. Chester is an alpaca, and Scott and Kevin came by Chester in the same general way they got all the others. They were told that if Chester did not come to live with them, he would become tiger food. I could poke any number of holes in this story, but I’m here to tell you that if someone came up leading a crocodile on a rope and claimed he was rescued from speed-bump duty at the Wal-Mart, the sturgeons in the lower pond would be getting instructions in getting along. 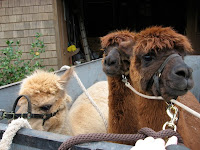