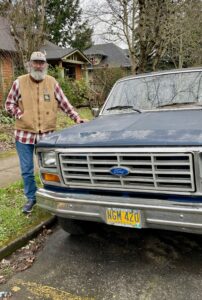 Everyone was impressed when Dave came home with a new Ford 150 pickup truck. Sure, it was ten years old, but the man never spent money on new vehicles, and in fact for most of his life never spent more than one paycheck on one. This Ford was fancy. It had all its paint in two colors with a matching canopy and although there was a ragged hole in the dashboard where a radio used to be before it was excavated by a roving entrepreneur, it looked positively pristine.

We took care of that in a hurry. He had no use for a canopy and we set it out in the yard and advertised it and it turns out nobody else had a use for it either, so we set it to work killing the lawn for a while and then hauled it to the dump. The truck was a good little worker. We made dump runs and compost runs and cow poop runs and gravel runs and a bunch of our neighbors had the key too, and then when water pooled up in a corner of the bed because it tilted toward the curb Dave drilled a couple holes in it for drains. We always got a kick out of lending it to the neighbors with the expensive truck. You know, the kind with the fluffy bed liner. They might as well have dressed it in satin and laid in a row of corpses with lilies. Not sure what they had in mind for it but bringing home cow poop was not in the cards. Enter our truck. The worker. 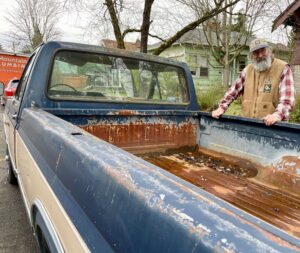 And I loved it because it had power steering, or something a lot like it.

But we will never have the affection for it that we had for our old Cornbinder.

Our friend Mike sold the International Harvester to us, so we knew the entire provenance. It had done serious time on a hippie farm in Spray, Oregon, and in all the fifteen years we owned it, it never looked any the worse for wear. That sucker was born ugly. It looked like a squared-off armadillo with an indifferent paint job and a front end with no pretense. It made a statement. “I am the front of the truck,” it stated. “You might want to move out of the way.”

It was ostensibly a half-ton truck but it was probably already hauling ten tons of its own ass around. Dave found an anchor chain off a freighter and a hook off a construction crane and pulled trees right out of the ground with it; in fact, that was the only reason he ever put it in first gear. And it did not have your sissy power steering. I could steer it okay unless I had to parallel park and then my passenger had to help me pull the wheel around. Also, it was not automatic. No problem, I’m no millennial—I could manage that just fine, except when I was hauling a load up 33rd Avenue and didn’t hit the light at the top of the hill, and then I’d keep the clutch halfway out and keep my foot on the gas until it screamed like a velociraptor and if anyone came up behind me I’d burst into tears. Other than that, I was a total stud with that thing.

The proudest Dave ever was was the time he went for a load of gravel and the guy came around with his front-end loader and tipped in about a half-ton. Dave gave him the keep-it-coming gesture and he dumped in another half ton. Dave checked the tires and squinted up at the guy and nodded confidently and gestured again, and the guy rolled his eyes in resignation and dropped the rest of the bucket, and the Cornbinder squatted like a giant cockroach. The steering was, for once, a breeze, because the front tires were touching the pavement only intermittently. For years afterwards we had that invoice for two and a quarter tons of gravel on our refrigerator where most people put their child’s school picture.

So we had it parked in front of the house the night someone murdered a man in the next block to steal his gold-wheeled car and he took that car and careened around the corner way too fast and plowed into our truck and lost control and crashed into another car in the next block. All the cars were smithereen central. Our side mirror sustained a crack.

And when Dave finally totaled it on a trip to Costco—an oncoming vehicle motioned him to turn left into the parking lot in front of him, and some guy whipped around him on the right and smashed into the front end, utterly pulverizing his own truck—you still couldn’t tell it had been hit. But something bad happened to the axle and it wasn’t worth fixing, I guess.

Shoot. It was like Paul Bunyan getting taken out by an infected paper cut.